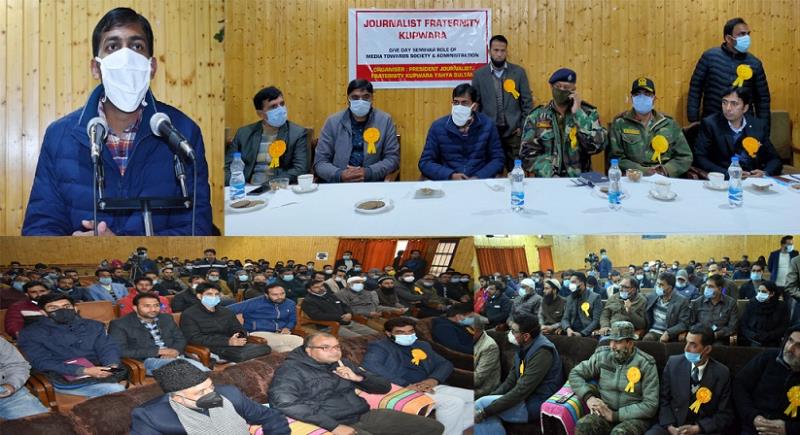 Kupwara: Deputy Commissioner (DC) Kupwara, Anshul Garg today stressed upon the media persons of the district to ensure accuracy of the newsfeed while meeting deadlines.

The DC said this while addressing a seminar on ‘Role of Media towards Society & Administration’ held here at Town hall Kupwara.

He said the media possesses a greater role in the society and acts as a bridge between the public and the administration adding that media, administration and civil society has a common role that is to serve the general public.

He stressed upon them to ensure awareness among the people regarding benefits of democracy and empowerment of people by means of public representation.

The DC also sensitised the media to ensure dissemination of information regarding elections in the district especially in far flung areas and urged them to ensure self-regulation to maintain professionalism in their reporting.

Senior Superintendent of Police Kupwara, Shri Ram Ambarker in his address said that media should be well aware about the new trends of communication and should verify the facts before circulating any kind of news in their groups so as to maintain the credibility of media among people and save them against the dangers of misinformation.

Various other speakers spoke on the occasion and stressed upon the media persons to ensure the objectivity of the news.

Earlier, President, Journalist Fraternity Kupwara, Yahya Sultan welcomed the guests. In his address, he stressed on the need for construction of a press club in the district.

Dir Agriculture reviews performance of Department in Doda and Kishtwar