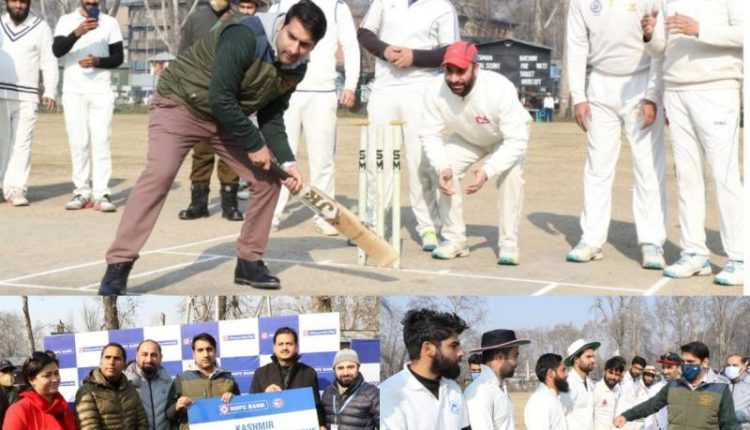 SRINAGAR : The Deputy Commissioner Srinagar, Mohammad Aijaz Asad Saturday inaugurated Kashmir Corporate Cricket League tournament launched by HDFC Bank here at Sonwar Cricket Stadium to promote sport spirit in the District and give young and promising talents from Corporate Houses and Government Institutions an opportunity to come together for the cause of sports.

After inaugurating the tournament, the Deputy Commissioner interacted with the participant players and urged them to enthusiastically participate in sports activities apart from their day to day official tasks for their physical and mental health.

While appreciating the efforts of the organizers, the DC expressed hope that the tournament will go a long way in inculcating leadership qualities and imbibe professionalism, team spirit and discipline among the players. He said that sports activities have a significant impact on the social and mental development of youth.

The DC said Government or Corporate employees hardly get time to participate in sporting activities. This initiative will provide a platform to the participating players to compete with their colleagues through a game they love.”, he added.

The DC said that the sport has a positive and constructive role in our social and psychological development besides such events enabling youth to engage in positive pursuits. He said various initiatives have been taken for the development of sports and requisite infrastructure

On the inaugural day two matches were played, one between HDFC Bank and JKEDI, while the 2nd match was played between SKIMS and New Secretariat.

Commenting on the launch of the Corporate Cricket League, Iftikhar Ahmed, said that for the first time HDFC Bank will be hosting a cricket tournament at this scale. He said the bank has always been a pioneer in improving the quality of life in the communities and Cricket can help youth connect with the Banking Sector positively.

iednewsdesk Jan 19, 2022
On a ski resort, after spending time on the slopes skiers will often head inside for a break in a restaurant or…

Zhejiang University: ZJU scientists unveil the enigma of the…