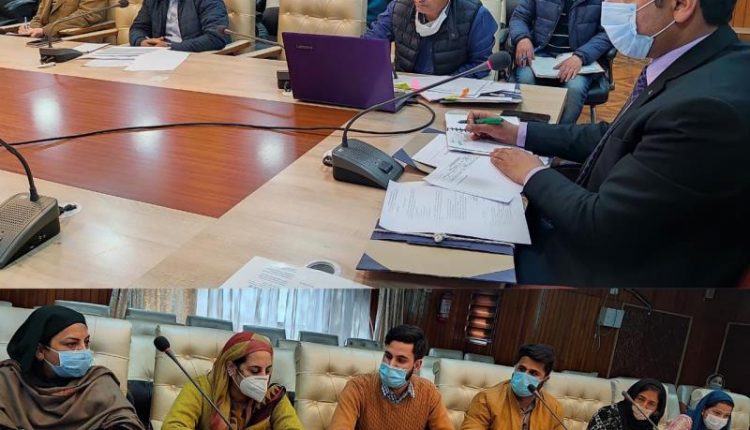 The DDC called for effective and prompt delivery of the services to the public without any difficulty.

He stressed on cent percent Aadhaar coverage in district Srinagar within a specific time frame. He asked the concerned agency to pace up the speed of the process and mobilize its men and machinery to achieve the target.

He instructed for setting up of Aadhaar Enrollment centers at all 7 Tehsil offices of the district.

The meeting was informed that 8.76 lakh population of Srinagar has been provided Aadhaar cards till date.

While reviewing the progress under the Ayushman Bharat (AB) Sehat scheme, the DDC stressed upon the concerned to speed up the process to ensure all eligible citizens of the district are provided Golden cards at an earliest.

He was impressed upon the concerned to file a report about the registrations done on a daily basis.

It was given out that about 2 lakh Golden cards have been issued so for to the beneficiaries and proccess is going on to achieve the target.

With regard to the functioning of One Stop Centres and Mahila Shakti Kendra and implementation of Social Welfare schemes in the district the DDC asked the concerned to put in extra efforts for visible improvement on ground so that target group is benefitted from the welfare schemes of the Government.

He further asked them to undertake measures for containment of Covid-19 in their respective jurisdictions.

J&K Film Policy to be among the best in the Country: Lieutenant Governor, Manoj Sinha