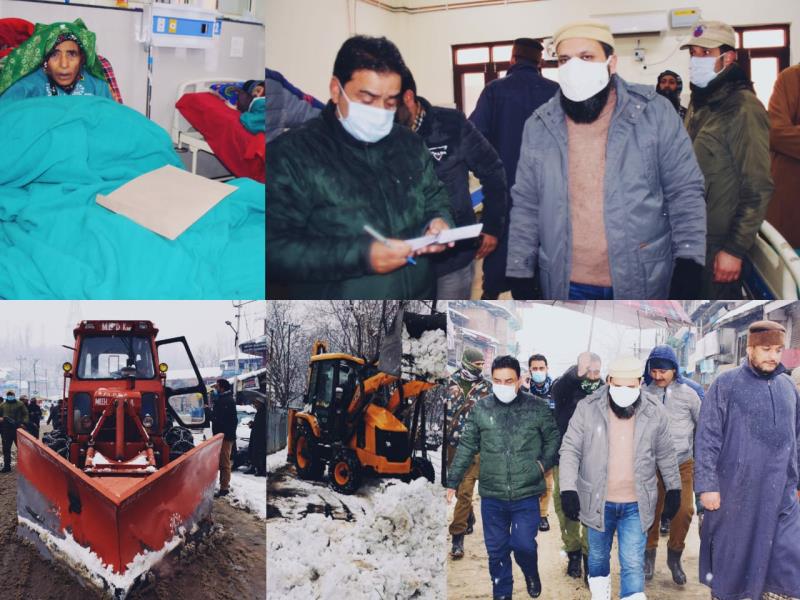 He also inspected the Medicare facilities being made available to the patients at the Sub District Hospital (SDH) Kupwara.

During the visit, the DC took stock of Snow clearance operations across all town roads directing the concerned to ensure clearance of roads to allow smooth traffic and pedestrian movement.

He also went around Byepass-road market, Iqbal market, Jamia Masjid Market, Darzipora market and other markets directing the concerned to strictly adhere to the price line.

The DC on the spot directed the concerned officers to intensify market checking across the district so that no one gets involved in black marketing and undue profiteering due to inclement weather conditions.

Later, the DC visited SDH Kupwara and inspected various sections of the health institution including the Gynecological ward and OPD section. He enquired about the presence of surgeons and other paramedics.

The DC called for a written explanation from Block Medical officer, Kupwara on account of non-availability of staff in the Hospital and designated Additional Deputy Commissioner (ADC) Kupwara as Enquiry Officer to ascertain the reason of absence of the doctors and paramedical staff from duties.

He directed the ADC to submit the report within three days for further course of action under rules.

The DC reiterated that health care is the first priority of the Administration, and he will himself monitor the presence of doctors by holding night inspections across the district.

He directed Additional Deputy Commissioner Handwara to have surprise inspection of hospitals in his jurisdiction and report the same to the Administration periodically.