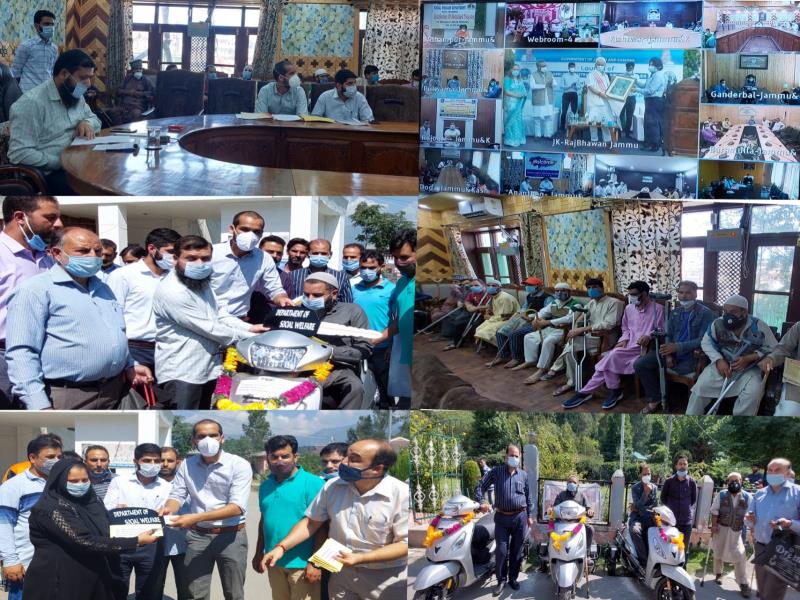 The distribution of motorized tricycles was organized by the Social Welfare department in collaboration with J&K Rehabilitation Council.

It was informed that all the beneficiaries of these tricycles have locomotive disability and most of them are students and self-employed persons. Each motorized tricycle costs Rs.75000 which is provided free of cost to the beneficiary.

Speaking on the occasion, the DC said that the Government is going to saturate the distribution of prosthetic aid among PWDs this year and in this connection, District Social welfare Office and Rural Development Department being nodal agencies shall conduct surveys of remaining eligible PWDs within the next 20 days.

The Nodal agencies shall be assisted by Anganwadi workers and PRI functionaries in identification of eligible PWDs for motorized scooters and other prosthetic Aid.

While interacting with media persons, the DDC complimented the Social Welfare Department for organizing the distribution camp for specially abled persons. He said that the Motorised Tricycles will empower the people with special needs and would include them in mainstream life. He added that the mobility of the specially challenged people would be pivotal in earning sustainable livelihoods without inconvenience.

Choudhary hailed the functioning of the Social Welfare Department and said the department has worked tirelessly during the pandemic and provided pension to 40239 pensioners in a time bound manner. He further added that the department has sanctioned 4808 new pension cases during lockdown, thereby reducing pendency to zero.

Moreover, free masks were distributed among the participants, attendants and employees of the department.

The beneficiaries were identified by the Department of Social Welfare and District Social Welfare Officer, Dr. Peerzada Farhat besides other officials of the department were present on the occasion.

Speaking on the occasion, the DDC said that the administration is committed to uplift the weaker sections of society adding that various schemes are being implemented for their empowerment.

He issued directions to the concerned departments to ensure proper utilisation of these schemes on ground.

The beneficiaries expressed their gratitude to the authorities and hailed the dept. for such initiatives.

On the occasion, the DM complimented the Social Welfare Department for conducting such events especially for specially abled persons of the district.

Vaishya said that motorised tricycles will empower the people with special needs and would include them in mainstream life and advised them to get themselves equipped with soft skills and technology.

The DM hailed the functioning of the Social Welfare Department and said that the department has worked tirelessly during the pandemic and thereby reducing pendency at an all time low.

The function was organised by the District Social Welfare Office, Kulgam.

Present on the occasion were, DSWO Kulgam, Tehsildar-HQ, TSWO, and other officers of the department.

On the occasion, the Deputy Commissioner appreciated the Social Welfare department for helping the specially-abled persons with necessary aids and equipment. He directed the concerned officer for coverage of more and more such persons in the district under different welfare and rehabilitation schemes of the department.

Meanwhile, the beneficiaries expressed gratitude towards the Deputy Commissioner for providing them motorized tricycles and hoped for benefits under other schemes in the same manner.

Govt is working to increase application of technology in agriculture sector,...

UGC Chairman says issues in conduct of CUET will be ironed...