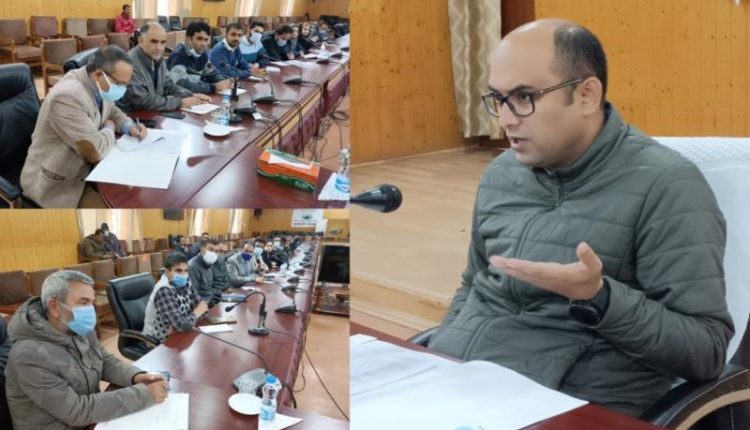 BARAMULLA : In order to review the Self Employment Schemes, a meeting of the concerned officers was held under the chairmanship of District Development Commissioner (DDC) Baramulla, Bhupinder Kumar at Dak Bungalow, here.

During the meeting, threadbare discussion was held on panchayat wise schemes during which the DDC stressed for organizing mass awareness programmes in the district.

The DDC directed the AD Employment to consolidate each scheme of all the departments, and for this purpose make use of social media and other mediums to make people aware about the Self Employment Schemes.

He also directed the ACD to ensure conducting Block Diwas besides panchayat and block level training programmes for master trainers who will be selected from the PRIs, so that the unemployed youth are benefited.

The DDC enjoined upon all the BDOs to provide opportunity to at least five unemployed youth through Tejasvini, mumkin and other government sponsored schemes. He impressed upon the officers to work with more cohesion and dedication so that maximum unemployed youth can get benefited.

The Assistant Director Employment on the occasion said that presently 1700 unemployed youth are registered with their department in the district.