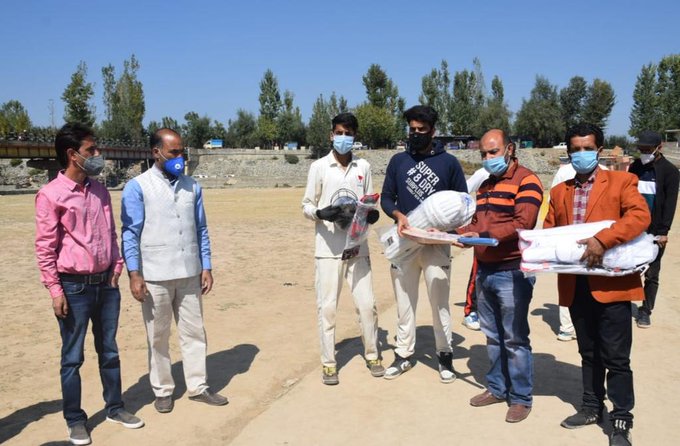 Doda: Launch of B2V-2 works and inauguration of several completed projects mark Day 2 of Back to village activities being held in 79 Panchayats of Doda district.
District Development Commissioner, Dr Sagar D Doifode along with SSP, Mumtaz Ahmed participated in the program at twin Panchayats of Sungli and Butla in Bhaderwah Block.
The DDC distributed Domicile certificates, pension sanction letters and insurance letters among the beneficiaries, besides sports kits among the children. He also unveiled the Panchayat Newsletter and Coffee Table Book in the presence BDC Chairman Bhaderwah and other PRI members and locals of the twin Panchayats.
The PRIs and locals projected various issues seeking timber for PMAY beneficiaries, augmentation of the power infrastructure in the areas having huge population, resumption of works on stalled road projects, provision of land for bus stand at Butla Panchayat, construction of bridge in the Panchayat, replacement of rusty water pipes in some areas of the panchayat, augmentation of the water supply scheme besides various other important issues.
Responding to the demands, the DDC passed on the spot directions to the Tehsildar Bhaderwah to identify the land for bus stand at Butla. He also directed the Xen PWD to formulate a project proposal for the bridge in 3 days and submit the feasibility report as the same would be included in district plan next year.
He further asked the Xen to re-tender the work of Kansar-Hadal road, while the ADC was asked to conduct an inquiry to assess the status of the PHE water scheme at Butla.
The DDC congratulated the PRI members for completing the B2V-1 works and asked to start the new works under B2V-2 for which Rs 10 lakh has been sanctioned to every Panchayat.
Similarly series of activities were held in rest of the Panchayats including holding of Gram Sabhas, updating of Awas plus list, pension list. The panchayat news letter was also read out in front of the locals by the visiting officers.

ANU: Australia has a critical role in tackling climate change

University of Michigan: Urban agriculture in Detroit: Scattering vs.…

University of Leeds: Screen use soars among UK adults post-lockdown