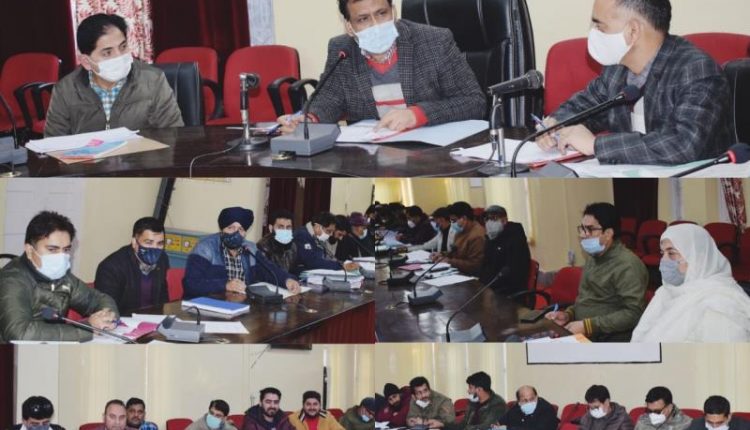 DODA : District Development Commissioner Doda, Vikas Sharma, today chaired the meeting of key officials of various line departments here in the conference hall of DC office to take the stock of progress made under the UT and District Capex including PRI grants, Area Development Program under implementation by various executing departments.

During the meeting, the DDC enquired about the status of tendering, allotment, actual execution of works on ground, besides reviewing the expenditure against the works which are completed.

While reviewing the expenditure status of works completed by RDD under PRI grants, the DDC asked the BDOs to complete the billing of the physically completed works within a week.

With regard to expenditure in ICDS, the DDC directed the DPO ICDS to get the UC from the field functionaries within the next seven days. The Ex Ens PWD Gandoh and Bhaderwah were asked to complete the tendering of the pending works immediately and the same was assured by the former.

While responding to the issue of expenditure in MC Doda, the DDC asked the Ex En to submit the list of completed works mentioning the date of completion for expediting payments for the same.

The DDC further directed the concerned BDOs to ensure that the payments are done against all the completed B2V works wherever they are completed as the funds are already at the disposal of the respective Panchayats. He further asked them to conduct the Gram sabhas for the plan formulation under PRI grants for the next year.

The DDC asked the officers to keep their staff in readiness mode and complete the works of District Capex including PRI grants on priority.

The meeting was attended by CPO Doda, SE PWD, SE JPDCL, ACD Doda, AC Panchayats, besides Ex Ens and BDOs and other officers of various line departments were also present.