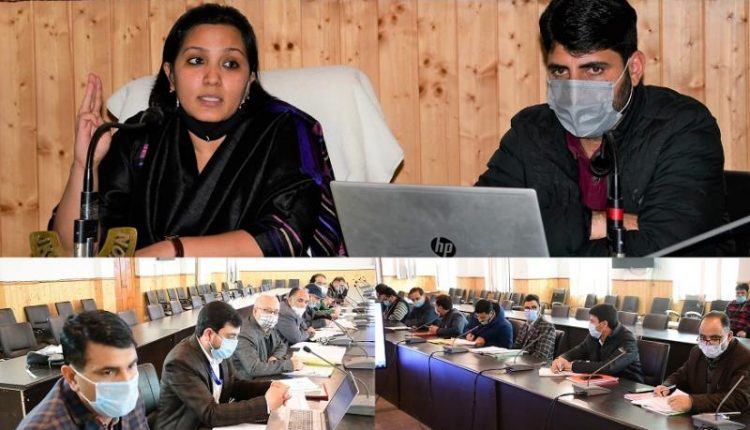 During the meeting, the DDC sought the details regarding utilization of funds under Capex budget, progress made under 14th FC, MGNREGA, PMAY (G), SBM funds, Aadhar seeding of job cards besides status of timely payment of wages.

On the occasion the DDC was briefed by the ACD through a power point presentation regarding physical and financial achievements made under different schemes including SBM, MGNREGA, 14th FC, Aadhar seeding, payment of wages, geo-tagging of works, PMAY-G besides progress of works approved under back to village program.

The DDC reviewed department wise performance made under various schemes and directed for completion of all pending works within the given timeline and warned them against any laxity and emphasized upon them to work with pro-active and people friendly approach.

While reviewing the progress on centrally sponsored schemes, the DDC stressed for generating mass awareness among the common masses so that deserving beneficiaries are covered under these schemes.

Regarding timely payment of wages, the DDC directed the concerned to accelerate the progress so that workers are paid their wages on time.

Meanwhile the DDC also reviewed the status of disposal of grievances registered on LGs grievance portal and directed all the officers to ensure the grievances are disposed within the stipulated time frame with quality disposal.

She impressed upon all departments to accelerate the pace of work in their respective areas by adopting innovative methods for effective implementation of schemes at the ground level.

She also called for special attention in the Agriculture and Horticulture sectors as most of the populace is directly involved with the agriculture and allied sectors which is the back-bone of the economy in the district.