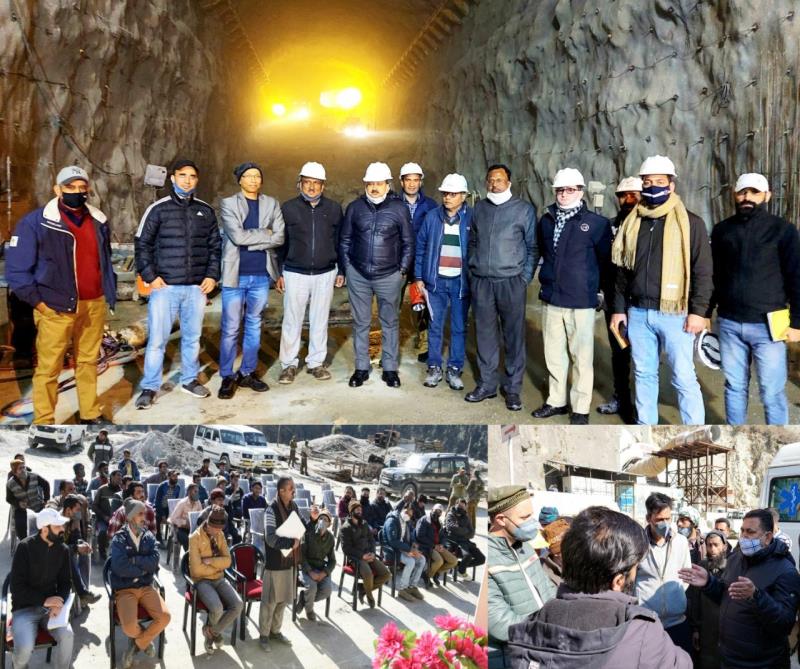 Kishtwar: District Development Commissioner, Ashok Sharma today visited the 1000 MW Hydro Electric Power Project at Arzi Kishtwar to redress the grievances of the people affected by the project.
He was accompanied by CGM Chenab Valley Power Project Ltd, P B Jain, Tehsildar, Kishtwar Pramood Kumar besides officers and officials of HEP and district administration.
During the inspection, the DDC reviewed the progress of the work at the power house at Arzi of Pakal Dool HEP. He directed the concerned authorities to expedite the pace of work to ensure the timely completion of the project.
A delegation of the Project Affected Families (PAF) apprised the DDC about various issues like the inclusion of the left out families in the RR plan, payment of pending compensation for structures and fruit and non fruit bearing trees, employment of locals in the project, besides, the upgradation of local infrastructure.
It was informed that the Local Area Development plan envisages construction of 2 passenger sheds with toilet costing Rs 20 lakh, construction of community Hall involving Rs 80 lakh, Veterinary Dispensary, School for local children and restoration of water facility among others.
During the interaction with workers, the DDC was apprised about the issues of delayed wages of some workers employed at crusher plant, besides disengagement of some worker by a few contractors for unknown reasons.
The DDC assured them that their genuine demands will be redressed in a time bound manner. He further informed that regular monthly meeting of the committee constituted to safeguard the interest of the locals will be held to listen and get the grievances of the people regressed effectively. The DDC directed Tehsildar Kishtwar to immediately evacuate the acquired land at Arzi dam site.
On the issue of the recruitment of the he local youths in the HEP, the DDC assured to monitor the recruitment personally and to constitute a Committee under the supervision of District administration for the transparent recruitment.
He asked the people of the Arzi Dool to constitute a three member committee which shall apprise the administration about the grievances related to water, electricity, health and education infrastructure from time to time.