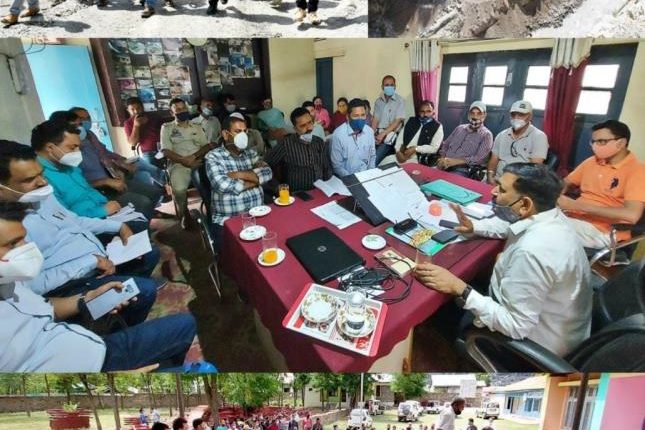 KISHTWAR : As a part of the ongoing outreach programme, District Development Commissioner (DDC) Kishtwar Ashok Sharma today conducted an extensive tour of the far off Paddar area of Kishtwar district and interacted with PRIs, who apprised him about the damages caused by recent flash flood in the area.

During the course of the day-long interactive session with the participants, threadbare discussions were held with regard to the damages caused due to flush floods in the area. The DDC also listened to the grievances of the PRIs.

Seeking immediate restoration of damaged infrastructure, he asked the concerned officers to complete the damage assessment to the bridges, crops, roads and other infrastructure in co-ordination with local PRIs and submit the report to his office within three days.

The DDC also directed the SDM Paddar to conduct an extensive tour of the areas affected by flash floods to know the ground situation with regard to damages so that post disaster measures are taken accordingly.

He assured the PRIs that reconstruction of the damaged public property would be ensured within 45 days.

He informed that Authorities of Department of flood control and Irrigation have been asked to project the protection work on priority basis.

Meanwhile, the sarpanches and PRIs also highlighted other grievances regarding their respective areas and localities. They demanded construction of alternative Machail road from Garh to Kukandrawn, speeding up work on Gorsi road, installation of cradle box at various nallahs, providing of free woods for home construction, mobile connectivity at Ishtiyari etc among the others.

The DDC directed the BDO Paddar to address the grievances raised by the BDC Chairperson and Sarpanches within 15 days.

Meanwhile, the DDC also Inspected ongoing civil works at GHSS Atholi and directed the XEn PWD to expedite the pace of work by restoring the double shift and mobilising the men and resources at work place with following of the CAB so that the projects of public importance shall be completed by 25 Aug 2021.

Besides, the JKPHC was asked to pace up the speed of work on 100 bedded Sub District Hospital Atholi to complete the project ahead of coming winters.

En-route he inspected the construction work site of HEP Keru where the project authorities briefed him about the work wise progress.

iednewsdesk Jan 18, 2022
Accidentally trapping sharks, seabirds, marine mammals, sea turtles and other animals in fishing gear is one of…