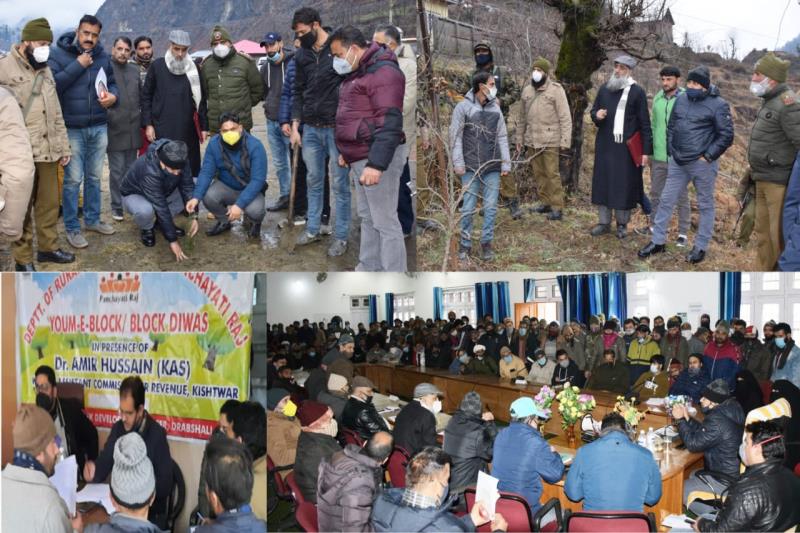 The Block Divas proceedings at Chatroo witnessed the participation of over 300 locals and the PRI members from different parts of the block.

Several delegation lead by BDC chairpersons and PRI members projected their demands and apprised DDC about their grievances which include the Posting of Doctor in the local PHC, augmentation of Power Receiving Station, payment of land compensation to land owners at current price, establishment of Fire station, conduct of special DG recruitment Drive in the block, payment of pending MGNREGA wages, electrification of Titwan village, posting of adequate staff in govt departments particularly in education and health institutions, Road connectivity to uncovered villages, issues related to the alignment of the approaching road to Singhpora- Valoo tunnel among others.

Responding to the demands, the DDC assured redress in a time-bound manner.

He also redressed many grievances on the spot and documented the rest which require intervention of higher ups. He assured proper tracking and follow up of all the issues raised by the people for their time bound redressal.

During interaction with the PRIs members, the DDC asked them to spread awareness regarding various welfare schemes of Government among the masses particularly regarding the recently launched Ayushman Bharat PM-JAY Sehat scheme.

He further stressed upon tapping of horticulture and agricultural potential in the area.

During the programme, he also launched the plantation drive at TRC Chatroo in collaboration with the Department of Forest.

On the way, the DDC visited the Model Nursery at Dambar Chatroo whereat CHO apprised him about the various varieties of the fruit plants progenies besides the high density plants being grown in the nursery.

Distribution Camp for Providing Aids & Assistive Devices to Divyangjan and…

India Education Diary Bureau Admin Mar 6, 2021
Aligarh: Mohd Anas Wajid, a research scholar of the Department of Computer Science, has been selected for…