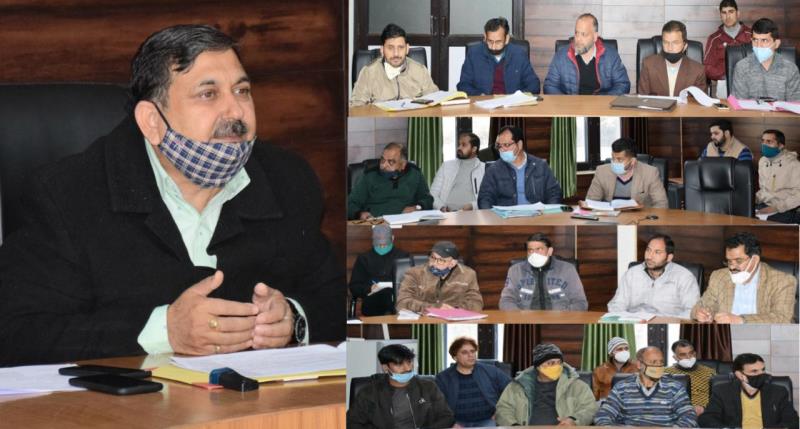 The progress of works taken up under Languishing Projects, B2V, PMGSY roads and other development projects were reviewed threadbare.

The DDC stressed upon the concerned engineers & officers to expedite the pace of work and complete all under construction projects within the stipulated time frame. He stressed on judicious use of funds.

To address the land identification and acquisition issues for construction of receiving station at Bunjwah, he directed XEn JPDCL to follow up the matter with concerned revenue officials. He futher directed XEn JPDCL to monitor the pace of work being executed by M/S Shallaka across the district.

He also stressed on meticulously following e-tendering and allotment process and timely uploading of bills.

He directed EO Municipal Council Kishtwar to ensure the hygiene and cleanliness in the town and proper utilisation of the parking places to avoid unnecessary traffic congestions.

While reviewing PMGSY projects, the DDC directed the concerned authorities for resolving the issues and removing bottlenecks if any to facilitate smooth execution of roads.

Besides, the DDC took stock of the progress of work on the KGBV at Marwah and Warwan, construction of playgrounds proposed under B2V, providing of potable drinking water to 109 schools, establishment of library at various High and Hr. sec. Schools in the district. He directed the concerned departments to complete the process in set time frame with due observance of guidelines issued by the Govt.