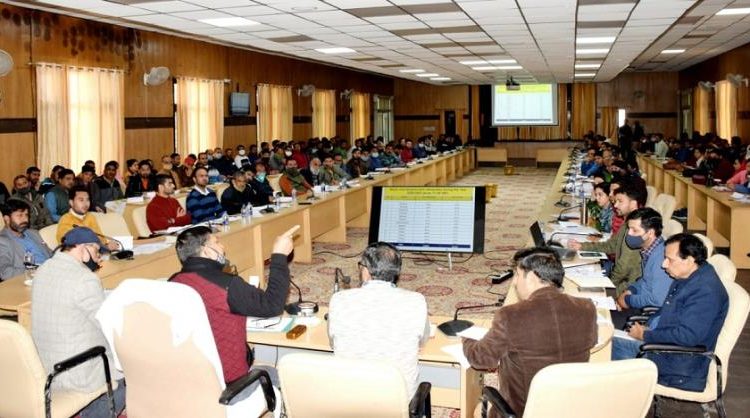 The meeting reviewed the functioning of the RDD at the grassroots level, besides discussed the modalities for the verification of job cards as per the census 2011.

The DDC directed ACD and BDOs to deploy field functionaries at grassroots level to conduct the verification of the job cards in their respective Panchayats. He informed the meeting that any disparity in the job cards will invite strict action against erring officials for their slackness in conducting proper verification and weeding out ineligible Job card holders. He further asked them to work professionally and ensure transparency in the implementation of MGNREGA schemes in the district.

The technical staff was impressed upon to expedite the process of the bill generation besides to improve the payment mechanism in the department so that the stakeholders will not face any problem and delay in receiving their payments.

Meanwhile, the block wise progress of the works undertaken were reviewed and the concerned BDOs were exhorted upon to pace up the work for timely completion of the allotted works before 31st of March 2021.

The BDOs were further asked to identify the Job Card holders engaged in the Hydro electric Power projects and initiate the process of weeding them out from the beneficiary list.

On the issue of Geo tagging and the Aadhar seeding, the technical staff of RDD was directed to ensure the completion of the pending entries before the end of this financial year.

He further directed the ACD to identify the land to construct Panchayat Ghars in left out Panchayats,. He also stressed upon for the timely disbursement of the pending installments of the PMAY(G) houses.