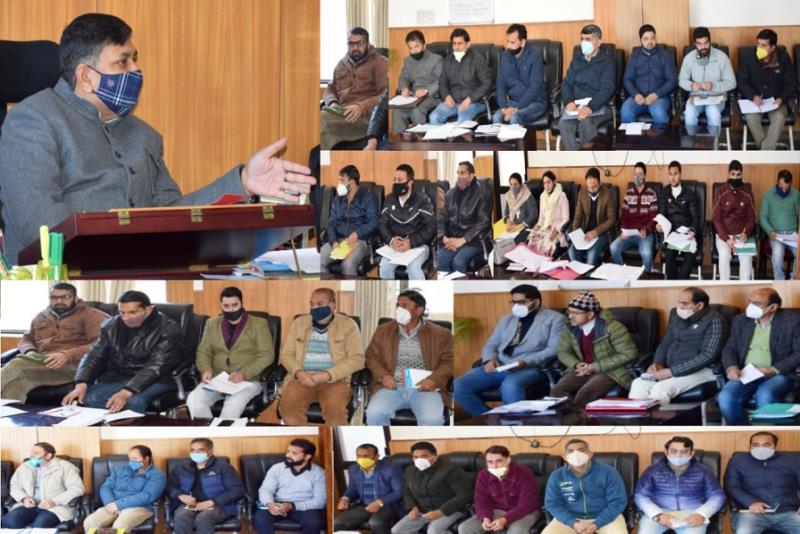 The DDC took division wise review of the progress of the PMGSY roads under construction in the district.

Forest clearances, land acquisition and other issues were discussed and necessary directions were issued.

The Executive Engineer PMGSY was asked to resolve all the issues and expedite the pace of construction work for time bound completion of the roads.

Concerned Executive Engineers were impressed upon to submit the report of non performing contractors so that strict action including the blacklisting and the termination of the contract can be initiated against the defaulters.

Sub division wise targets and the achievements were also discussed and the concerned AEE were asked to speed up the pace of work.

In an another meeting held with the Rural Development Department, the DDC reviewed the progress and position of the developmental works undertaken by RDD under MGNREGA, 14 FC, convergence and SBM for the FY 2019-20.

During the meeting a thorough discussion on the schemes was held during which concerned BDOs informed about the current status of works in their respective blocks.

The DDC directed all the BDOs to achieve the target of 100% expenditure by the March 2020 and in this directed instructed them to complete the payments of the work already executed and take up the identified new works immediately.

He stressed upon the department to ensure effective and transparent implementation of the schemes to ensure that the benefits percolate down to the eligible beneficiaries.

He further asked the ACD Kishtwar to furnish list of works with pending liability under material component for the FY 2018-19 and further directed to constitute the Committees headed by the concerned SDMs with BDOs and Tehsildars as members to look into the matter and submit the report in his office for further redressal.