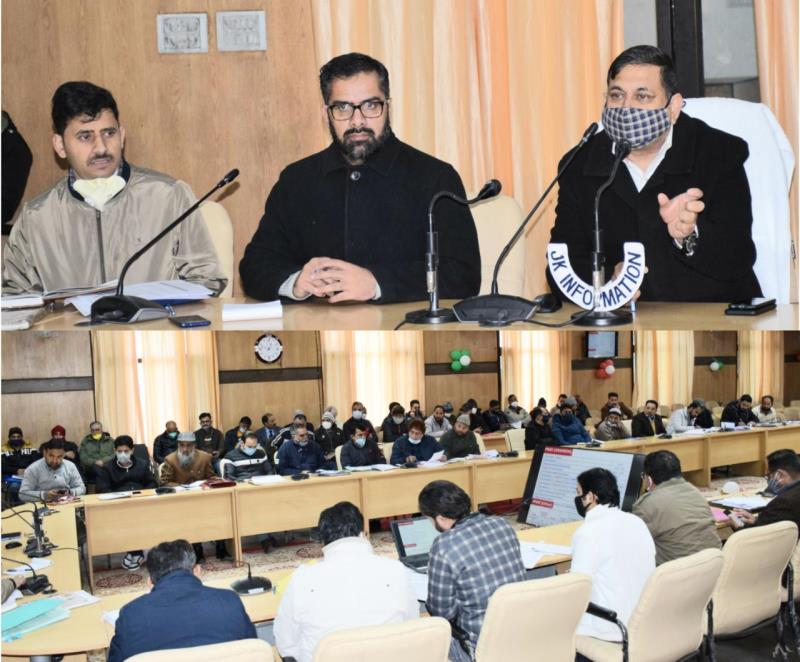 During the meeting, the DDC took detailed scheme-wise physical and financial status of the projects undertaken by different departments under the languishing project, PMDP and other schemes.

Besides, he also assessed the status of technical sanctioning, administrative approval and tendering progress of several projects.

The Joint Director Planning informed the meeting that out of total 10 projects costing Rs 11316 lakh, taken up under the PMDP, work on 9 in progress and 01 has been completed, while out of 45 works taken up under the languishing projects amounting Rs 11982.39 lakh, 09 projects at an expenditure of Rs 540 Lakh have been completed so far and work on 29 is in the progress and 04 works have been recommended for de-sanctioning due to litigation and unavailability of land etc.

The DDC set the timelines for each project and directed all the concerned officers and officials to accelerate the pace of progress for their time bound completion. He further instructed the executing agencies to ensure the use of quality of material in these works.

Expedite vaccination of Jail Inmates, staff as per Govt…

Highlighting the benefits of various welfare Schemes of Labour Department, the DDC asked ACD Kishtwar to ensure registration of all eligible job cardholders with J&K Building and Other Construction Workers Welfare Board for which ALC Kishtwar was instructed to facilitate rural development department in every aspect. Besides, the District Social Welfare Officer Kishtwar was asked to weed out inactive beneficiaries and register new eligible beneficiaries with the social security schemes of the department.

While reviewing the progress of the PMAY (Rural) and PMAY (Urban), Joint Director Planning informed the meeting that 12000 families have been identified in the district under Awas plus.

In this context, the ACD and EO Municipal Council Kishtwar was impressed upon to expedite the pace of work for timely completion of the PMAY houses ahead of shifting towards Pradhan Mantri Awas plus.

Progress on various Water supply schemes under execution in district was also reviewed in the meeting.

The progress on Ayushman Bharat- PM Kissan besides other schemes was also reviewed in the meeting.

India Education Diary Bureau Admin May 18, 2021
New Delhi: Times Professional Learning (TPL) has partnered with both the Union government and the state…

Expedite vaccination of Jail Inmates, staff as per Govt guidelines in…