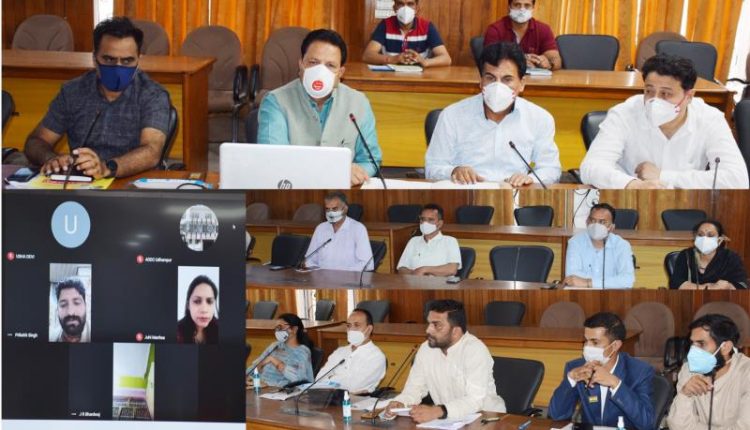 At the onset, the ADDC briefed about the modalities to be followed for preparation of plan.

The Chief Planning Officer, Rajeev Bhushan gave a detailed overview in consonance to the guidelines issued by the finance department with regard to the preparation of District Development Plan for the current financial year 2021-22 in the District Udhampur. He informed that an amount of Rs.10.00 Crore has been sanctioned as DDC grant plan for district Udhampur.

The DDC Chairperson exhorted upon the elected representatives and PRIs to prioritize works as per the popular local demands of the people, while formulating plans for their respective areas. He reiterated that timely formulation of development plan will help a lot to take up the works in time and utilization of budgetary provision.

He asked to keep the key areas in mind while preparing plans so that a larger population can be benefited and demands raised during back to village programs, block Diwas and IGRAMS are met. He called upon the elected PRIs to identify the works already taken up in previous plans and appealed them to work with synergy to achieve development goals.

He said the role of PRIs is pivotal in strengthening grassroots level democracy and promoting participatory planning which calls for the involvement of all stakeholders in identification of key areas of development. He listed major components of District Capex, which include UT component/ Regular Schemes Negotiated Loan Central Share for CSSs, State Share for CSSs. He added that more than 90% contribution of District Capex is from Central Schemes viz. NRLM, MGNREGA, PMAY, AIBP (PMKSY), SMARGA, MDM, JJM and PMGSY.

The chairperson took views of each DDC member as they recommended for equal distribution of funds among DDCs constituencies from DDC Grants and suggested that the plan shall be finalized by the District Development Council.