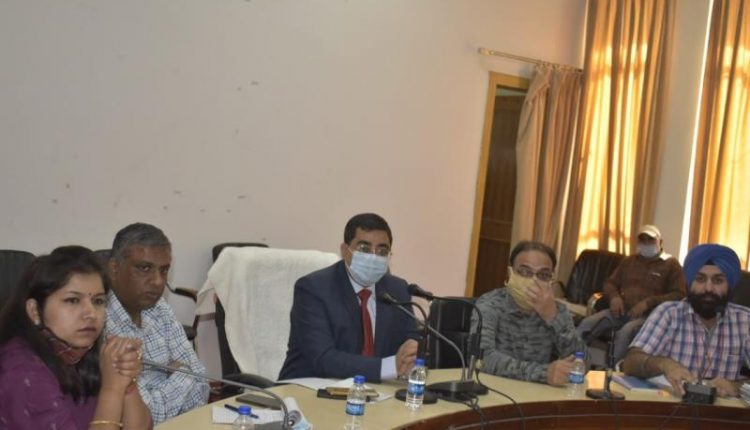 He was chairing a meeting of the line departments to take review of the progress on the developmental front and deliverance of public service on the ground level.

The DDC took a detailed stock of the physical and financial achievements under different schemes and projects being executed by PWD, Jal Shakti, RDD, Power, JKPCC, Education, Health, I&FC Agriculture, Horticulture, Animal and Sheep Husbandry and other Departments in the district. Issues about the execution of projects were also discussed threadbare in the meeting.

While reviewing the progress, DDC directed the heads of concerned departments to focus on the projects whose work is nearing completion. He set December, 2021 as the deadline for the completion of all ongoing schemes.

While taking a review of construction of Bunkers, it was informed that out of 1867 bunkers taken up by the Rural Development Department, 1497 have been completed. The PWD was asked to complete the remaining 73 bunkers by December 2021.

The DDC asked LDM to hold melas for clearance of loan taken under KCC from 14th at each JK Bank Branch.

Discussing the physical and financial progress of the Education sector, the DDC asked the CEO to monitor the progress and quality of the works and directed the executing agencies to go for tendering at the earliest. He also directed the CEO to ensure that mid day meals are provided to all the students.

Taking stock of the literacy rate in the district, the DDC instructed for 100 per cent enrollment of the school dropouts, while the RDD was asked to conduct a survey to enumerate illiterate adults in the villages. The DDC also instructed for hundred per cent coverage of all the eligible students under Scholarship schemes.

The DDC also reviewed the implementation of Social security schemes including Atal pension yojana, Pardhan Mantri Jeevan Jyoti Bima Yojana, Pardhan Mantri Suraksha Bima Yojana and Pradhan Mantri Mudra Yojana. It was apprised that 15346 cases of Atal Pension Yojana have been approved in the district. DDC asked the concerned officers from Social Welfare, RDD and Banks to give wide publicity to the scheme. He also directed for 100% saturation of various initiatives and measures taken by the Government for percolation of benefits to the maximum number of people.

He also asked to go for an extensive campaign under Jan Dhan Yojana to cover all the eligible beneficiaries under the scheme.

Reviewing the progress made under the self-employment generation schemes, it was informed that under 145 cases have been sanctioned of which loan has been disbursed to 96 applicants.

Discussing the registration of the labourers on E Shram Portal, the Labour department was directed to create awareness among the public on E Shram and target MGNREGA job card holders for registration.

Implementation of PM-KISAN was also reviewed and directions were passed for coverage of all eligible farmers under the scheme.

Stress was also laid on curbing the illegal mining by taking strict action against the perpetrators as per the rules.

Similarly, the DDC also took a comprehensive review of schemes being implemented by Social Welfare, NRLM ICDS, Health and other Departments.

Taking the review of implementation of PMAY G, the DDC directed for completion of 22000 houses by December this year. The Directions for formulation of Panchayat Rural sanitation plan within two weeks after consulting the PRIs were also issued.

To engage youth in development of rural economy, the DDC directed the RDD, Banks and DIC to identify 10 youth per Panchayat to provide them self employment avenue.

The DDC also reviewed the status of playfields being constructed at Panchayat levels under Mission Youth and BDOs were directed to complete the same at the earliest. Development of tourist Villages under Mission youth was also discussed in detail. The DC directed for formulation of DPRs for implementation of the tourist village development scheme.

Moreover, the DDC also took stock of the progress made under SEHAT scheme and Aadhar Enrollment. He asked the concerned to ensure that all the eligible beneficiaries in all the 312 Panchayats of the district are covered under the scheme.

Taking serious note of delay in start of important projects, the DDC asked the executing agencies to start blacklisting the defaulter contractors.

Eindhoven University of Technology: i-Cave: the future of moving forward