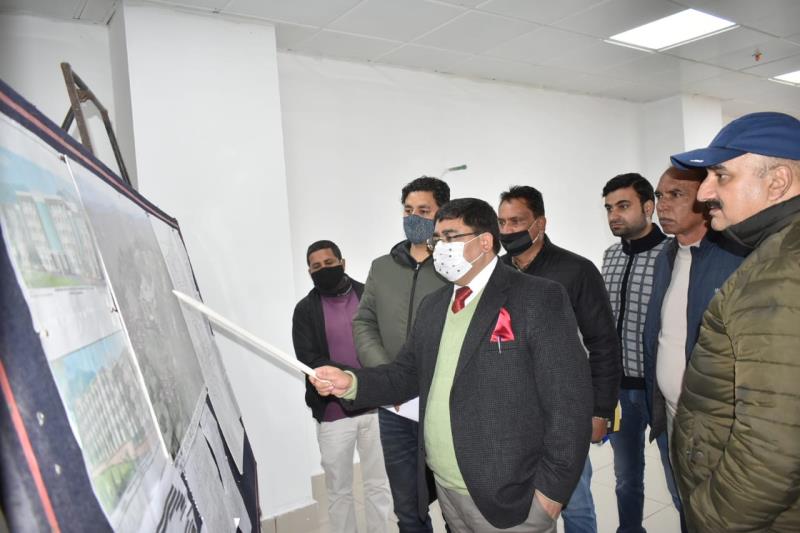 The DDC inspected the progress on Government Medical College coming up at an estimated cost of Rs 139 crore including Rs 69 crore for the Academic Block, Rs 40 crore for the Administrative block and Rs 30 crores for other allied works.

The DDC was informed that the work on both the blocks and the approach road to GMC would be completed by February end this year and that on Hostel and residential building the following month.

The DDC asked the executing agencies to expedite the work to meet the set deadlines.

While inspecting the double-laning of Abdullah Bridge with a total length of 120 meters, the DDC was informed that the project has been approved under languishing scheme at an estimated cost of Rs 4.78 crore. The DDC asked the concerned authorities to speed up the work on the project to ensure its time bound completion so that the issue of traffic jam in the town can be addressed.

Officers from the Border Roads Organisation, at the Rajouri-Thanamandi road, apprised the DDC about the status of works. They assured that all the works would be completed by January 2023. The DDC also took notice of some land acquisition issues and directed that concerned authorities to make the road motorable at the earliest for the convenience of the public.

During his visit to One Stop Centre, the DDC reviewed its functioning and spoke to its Administrator OSC, Nitu Sharma. She apprised the former about a number of issues being faced by the centre to which the DDC assured early action.

Earlier, the DDC also paid obeisance at the Chatti Pathshai Gurudwara and prayed for the peace, harmony and wellbeing of the public.

NIT Srinagar to be implementing Agency for Design Expertise Scheme