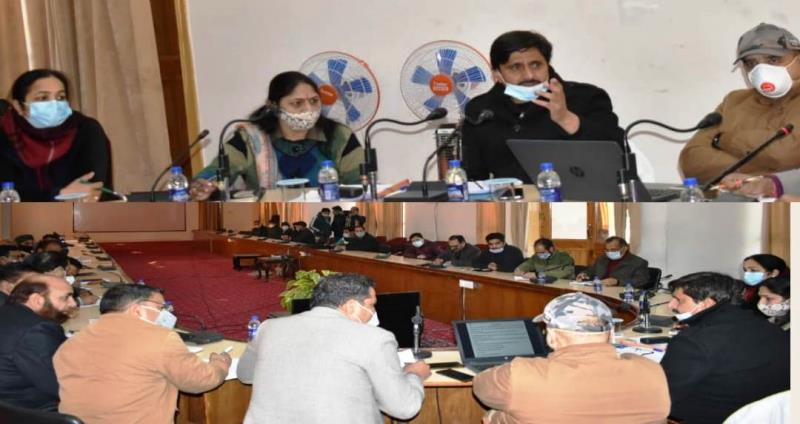 Rajouri: District Development Commissioner Rajouri, Mohammad Nazir Sheikh on Tuesday discussed the modalities for the implementation of National Ayush Mission in the district here at a meeting of the District Ayush Society.

A threadbare discussion on various points including identification of land for the construction of 50 bedded ISM hospital, distribution of Ayush Medicines, provision of ambulance facility for ISM Dispensaries of border areas besides the physical and financial progress of AYUSH buildings being constructed by different executing agencies was also reviewed in depth.

The DDC said that the vision of the National Ayush Mission is to promote AYUSH treatment systems through cost effective AYUSH services, strengthening of educational systems, facilitate the enforcement of quality control of Ayurveda, Siddha and Unani & Homoeopathy (ASU &H) drugs and sustainable availability of ASU & H raw materials.

The DDC asked the concerned to implement the mission in true spirit to provide benefit to maximum number of people. He also lauded the efforts of the AYUSH Department in distributing the immunity booster medicines among the people amid COVID19.

Reviewing the progress on the construction of AYUSH buildings, the DDC asked the concerned executing agencies to speed up the work on the projects to provide early benefit to the general public. He also asked them to provide the detail of the project wise works within week’s time.

The DDC also directed the Executive Engineers of PDD and Jal Shakti Department to ensure uninterrupted power and water supply to Ayush Health Centres. He also directed the concerned from RDD to construct the community sanitary complex in the AYUSH buildings.

The DDC informed that the land for medicine plant Nursery has been identified at Siot, while a committee has been constituted which shall submit the feasibility report within two days.

It was also decided in the meeting that the departments like Education, RDD, Social Welfare, ICDS and Health shall work in close coordination for the proper dissemination of information on ground level regarding various types of AYUSH services so that the general public can avail the benefits of the same.