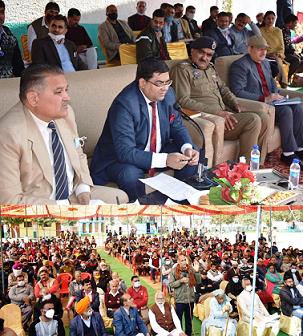 The People representing diverse sections of society including social activists, PRIs, prominent citizens, Retired Government Employees and common masses from Sunderbani and adjoining areas thronged the Public outreach camp and put forward a number of issues pertaining to them.

They apprised the DDC about developmental issues of their respective areas and sought augmentation of water supply, macadamization and renovation of roads, upgradation of schools, better health services and related issues.

Many of the issues were resolved on the spot with the intervention of the concerned departments.

Specific issues and demands projected on the occasion included; resurfacing of the Kalideh Kuldabi Road; replacement of old and obsolete water pipes and taking over the old building of Milk Chilling plant.

The other demands projected by the people included repair of irrigation khuls of the area; meeting the staff requirement at pumping stations; Quality cocoon seeds to be provided to the cocoon rearers; posting of Medical officers; sanctioning of PHC centres in the remote areas; sanctioning of Animal Husbandry Sub centers; and issues pertaining to the forest department.

Other issues like fencing of school buildings, upgradation of the School ; functioning of the niabats; sports infrastructure for the youths of Sunderbani and adjoining areas; Completion of GDC Sunderbani buildings; deployment of police personnel at the gate of the GDC Sunderbani; buffer stock of PHE and PDD machinery.

Completion of panchayat Ghara, Pending MGNREGA payments, PMAY payments and inclusion of genuine beneficiaries in the list; wooden bridges to be replaced by the culverts ; funding under TSP; permission to carry out minor developmental works under forest areas, FRA issues are some of the issues which were raised by the public.

The Public also demanded the opening of blood bank; fire station at Sunderbani; payments of PMGSY compensation and Payment of rent of lands occupied by the Army.

Meanwhile, the DDC had a patient hearing of the grievances and issued on spot directions to the concerned for their redressal.

While addressing the public on the occasion, the Deputy Commissioner asked the officers of the district and Sub division administration to address the issues at grassroots level and assert themselves in resolving local issues of public importance.

He particularly impressed upon them to show keen interest in ensuring quality of developmental works in rural pockets.

The DC also directed the officers of PHE and PDD to carry out the house to house survey and assess the needs of the public and resolve them on priority basis.

Meanwhile, the DDC appealed to the elected PRI members to extend cooperation and maintain coordination with the administration to enhance the process of development in the region.

He informed that the District Administration has launched a unique initiative of Lok Mitra’s in the district which will act as a bridge between the Administration and the Public.

The Deputy Commissioner also informed that in order to monitor the activities in the schools the District Administration has devised a first of its kind initiative Rajouri School Information System which will be launched next week.

The DC also inspected the progress of work at Government Girls Higher Secondary School. He asked the executing agency to complete the building in all respects by 25th of March 2021.

He also directed the Executive Engineer PWD to start the double shift work on the GDC Sunderbani Building to complete the project at the earliest.

The Deputy Commissioner also visited the SDH Sunderbani and interacted with the doctors and paramedic staff.