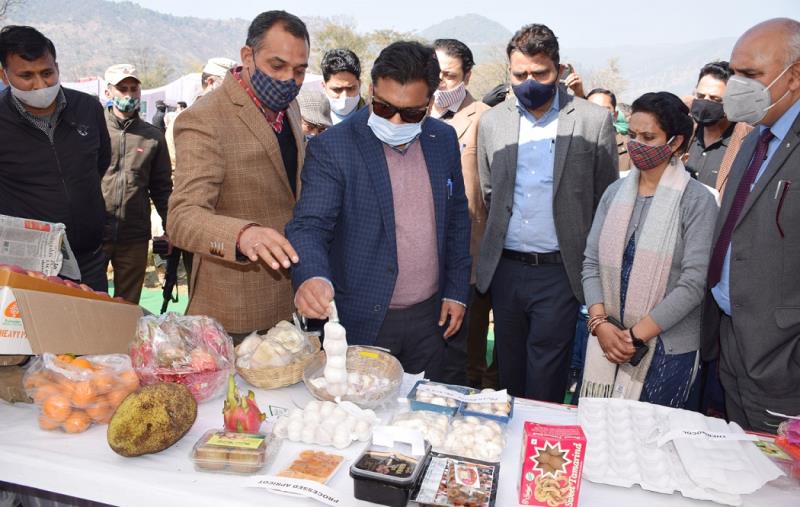 In his address, the DDC congratulated the farmers for their participation in kissan Mela and stressed upon them to come forward and avail maximum benefits of different government schemes.

The DDC applauded the efforts of Agriculture department for carrying out the benefit of different CSS-schemes to the needy farmers for their socio-economic uplift as per the guidelines. He emphasized that “Jeevika” model has proved to be the cornerstone in uplifting the Agriculture production and economic status of the farmers of the district. He urged the farmer to adopt methods for water conservation on larger scale.

He revealed that District Udhampur has been awarded pickle under one District one Product (ODOP) and other Central sector schemes viz, Agriculture Infrastructure Fund and Prime Minister Formalization of Micro Food Enterprises (PMFME) are in vogue by which the unemployed youth and rural masses can avail the opportunity for establishing startups in Agro processing ventures.

The DDC said that training of Farmers in latest technology is the need of the hour and this type of shows apprise the farming community regarding the ongoing schemes and level of subsidy available with the departments under different key production components including Vegetable Seeds, Farm Machinery, Tools & Implements besides Cereals, and Fodder crops etc. He added that rural areas in the district are being primarily agriculture based; the farmers should take the advantage of these training programmes and adopt all the technical know-how imparted by the various departments in their fields to uplift their economic status.

He also commended the efforts of the department in the field of organic farming and its promotion in rural areas of the district as organic crops are highly remunerative and health protective.

DDC advised the farmers to take full benefit of these programmes and adopt agriculture with highly innovative modern techniques to explore the market probabilities in highly remunerative enterprises like Mushroom Cultivation, Apiculture, Spices cultivation, protected cultivation and integrated farming system based model of Jeevika. While appreciating the efforts of Agriculture department for organising this kissan mela, DDC asked the Chief Agriculture officer Udhampur, Subash Sharma to arrange such more programmes in future in other remote areas of the District also.

Earlier, Chief Agriculture Officer Udhampur Subash Sharma presented welcome address and highlighted the departmental schemes. The CAO said that the convergence of all the stakeholders under the one umbrella will act as a platform to work out the future course of action for increasing the production and productivity level of farming community and raise their socio-economic status and to make the agriculture more lucrative and remunerative per unit area and per unit time by switching over from low production to high profitable diversified farming as this district is bestowed with agro-diverse climates. He added that agriculture being the mainstay of these areas and farmers are utilizing their resources for subsistence purpose only.

The Farmers of the District appreciated this move of the department and show keen interest in the “District level Kissan Mela” and desired that such types of events should be organized in future at block levels, so that improved Agriculture practices along with schemes and benefit of all the sectors may be extended to the grass root level as required in order to raise the overall socio-economic status of the farmers.

Block Development Chairman, Ghordi Arti Sharma also spoke on the occasion. She explained that such type of programmes will explore new vistas in the field of diversification in agriculture and will boldly help in advancing their skills in Agriculture and also help in increasing their farm income, rooting out drudgery and rural indebitness through KCC and PM Kissan Samman Nidhi Yojna.

The BDC Chairman projected several demands like establishment of tube well, Tehsil and KV at Ghordi,Bank Branch Barmeen etc on the occasion.

Over 131 exhibits were displayed by different departments like Agriculture, Horticulture, Animal Husbandry, Sheep Husbandry, Fisheries, Handicraft, Sericulture, Apiculture, State Bank of India etc. The DDC had a round of stalls, installed by various departments for general awareness of different schemes.