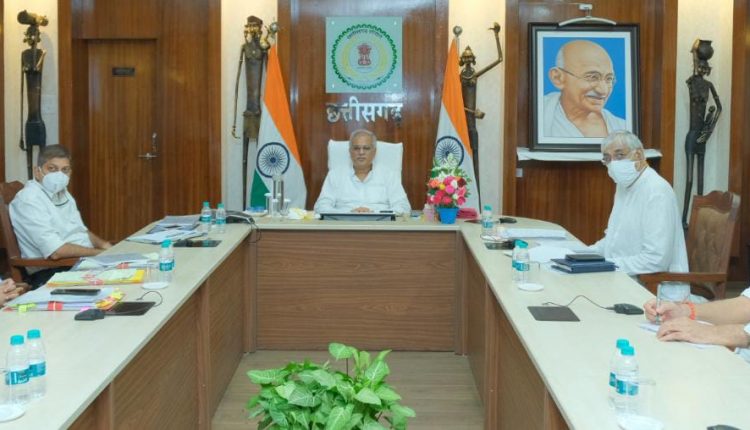 Raipur: Chief Minister Mr. Bhupesh Baghel, while reviewing the works of Panchayat and Rural Development Department at his residence office today, said that irrigation facilities are essential for development of agricultural activities in the state. He directed the officials of the Panchayat and Rural Development Department to build wells and ponds (dabari) in the lower part of the farmers’ fields under MNREGA, as this would collect rainwater from higher side of the fields into the wells and ponds. Water so collected can be used by the farmer for irrigation. He also directed to provide pumps to the farmers as per the requirement. Chief Minister also talked about benefitting the forestland lease holding farmers by providing irrigation facility through wells and ponds. The review meeting was attended by Panchayat and Rural Development Department Minister Mr. T.S. Singhdeo, Agriculture and Water Resources Minister Mr. Ravindra Choubey, Chief Secretary Mr. Amitabh Jain, Additional Chief Secretary Mr. Subrat Sahu, Additional Chief Secretary Panchayat and Rural Development Smt. Renu Ji Pillai, Secretary Mr. R. Prasanna.
While reviewing the progress of PMGSY implementation, Chief Minister Mr. Baghel asked the officials to ensure participation of local youth in the rural road construction works of Bastar region so as to ensure timely completion of the works under the scheme. Chief Minister also gave instructions to decorate the aanganbadis built and sanctioned under Panchayat and Rural Development Department and to provide sports facilities there for children. Chief Minister appointed the Panchayat and Rural Development Department as nodal agency for development of Rural Industrial Park in Gauthan and for providing support and guidance regarding the income-oriented activities of women self-help groups.
In the meeting, Chief Minister directed the department officials to complete the construction of small structures in the drains on priority for rainwater harvesting and ground water augmentation. He also gave instructions to build earthen dyke walls at the suitable spots in rivers and streams and to ensure treatment in the 24 development blocks affected by groundwater-related problem. Chief Minister also directed to build shed over the approved and under-construction platforms in the paddy procurement centers of the state. This would help in keeping the procured paddy safe in storage. In the meeting, Additional Chief Secretary Panchayat and Rural Development Smt. Renu G. Pillay informed that 107 percent of the given target has been achieved in the state by generating employment of 669 lakh man-days under MNREGA so far in the current financial year. In the year 2020-21 and 2021-22, about 85 thousand construction works were approved under MNREGA, out of which 37 thousand works have been completed and the remaining are in progress.
In the meeting, the progress of the works under State Rural Livelihood ‘Bihaan’, Rurban Mission, Pradhan Mantri Awas Yojana (Gramin), Swachh Bharat Mission, Special Project, Utthan, Milap, Srishti as well as Pradhan Mantri Gram Sadak Yojana was thoroughly reviewed. It was informed in the meeting that against the approval to connect 10,924 out of 12,178 habitations of the state via concrete roads, 10446 habitations have been connected so far. Under the scheme, construction of 8539 roads was approved, out of which construction of 7530 roads of 37,848 kms has been completed.

University of Reading: University Of Reading Leader Paving The Way For Greater Equality In Universities