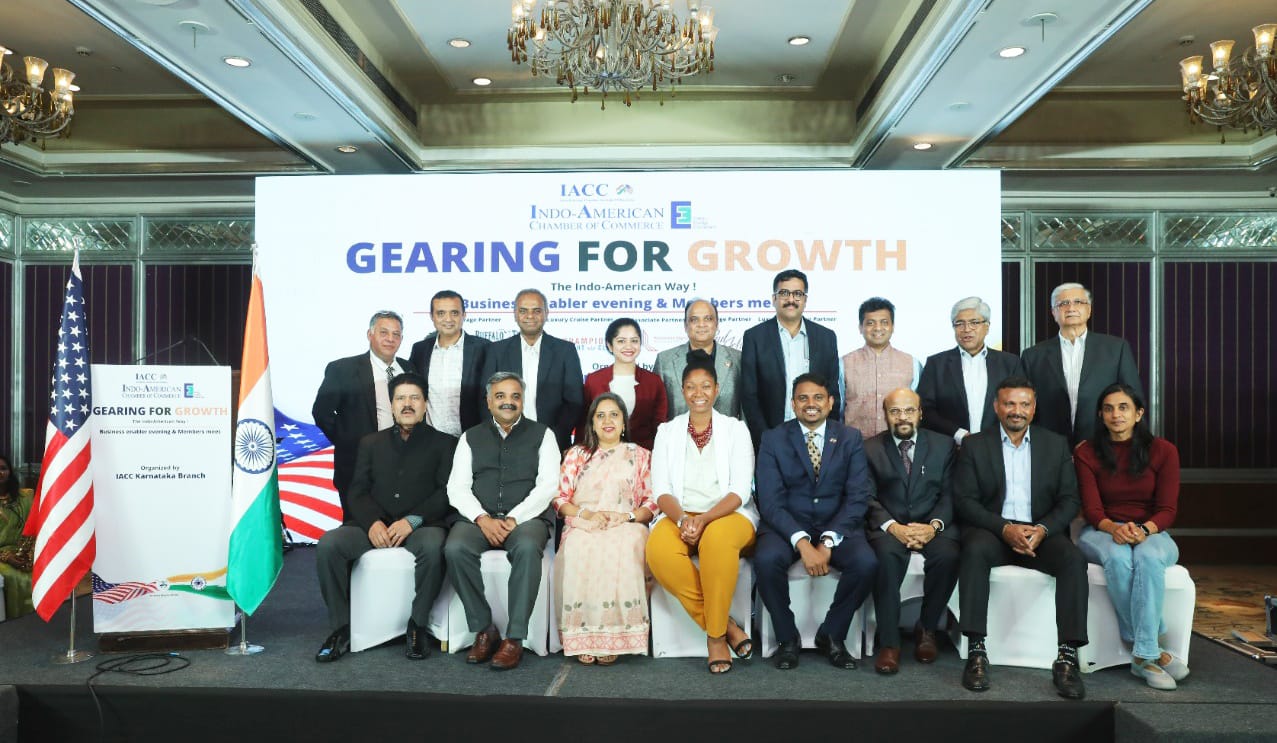 Bengaluru: The Indo American Chamber of Commerce [IACC] Karnataka organised their annul member meet business enabler event at the Taj West End Hotel, Bengaluru, on 21st July 2022.
The evening provided a platform to the members to interact directly with the Chief Guest, Ms. Virsa Perkins, Political-Economic Chief of the US Consulate, Chennai and guest of honour Mr. Sanjeev Gupta, CEO – Karnataka Digital Economy Mission [KDEM].
The Chairman of IACC Karnataka, Mr. Jose Jacob K addressed the gathering with a thematic talk on ‘Gearing for Growth’ as he cited a recent NASSCOM report and trade statistics saying “The US surpassed China as India’s biggest trading partner in the financial year 2022 with close to 120 Billion $ in trade and Indian tech companies have added almost $200 Billion to the US economy while creating 1.6 million jobs’
He highlighted the tremendous growth in the Indo-American trade trajectory in the last decade and prospects for even better economic relations going forward and urged members of the chamber and the business community at large to further deepen relations.
Mr. Chandrakanth B N, Sr. Vice Chairman, IACC Karnataka introduced the Chief Guest, Ms.Virsa Perkins, who with her graceful presence addressed the gathering while highlighting the importance of India as a strategic partner for the US in the indo-pacific region and how QUAD as an alliance is shaping even deeper partnerships in the region.
The guest of honour for the evening Mr. Sanjeev Gupta, CEO of Karnataka Digital Economy Mission [KDEM], was delighted to announce that once again Karnataka topped the NITI Aayog India Innovation Index. Making a strong case for investments in Karnataka he said “If we have to work toward the vison of the Prime Minister to achieve the $5 Trillion economy, the digital economy and Karnataka in particular will have to pay a significant role”
The office of IACC felicitated the Dignitaries by presenting them a plaque as a token of appreciation.
The event concluded with a befitting vote of thanks from Mr. Raj C M, Vice Chairman of IACC Karnataka, after which was followed by networking cocktails and dinner.

University of São Paulo: USP and Ipen launch an innovation space to offer technological solutions in the area of ​​life sciences