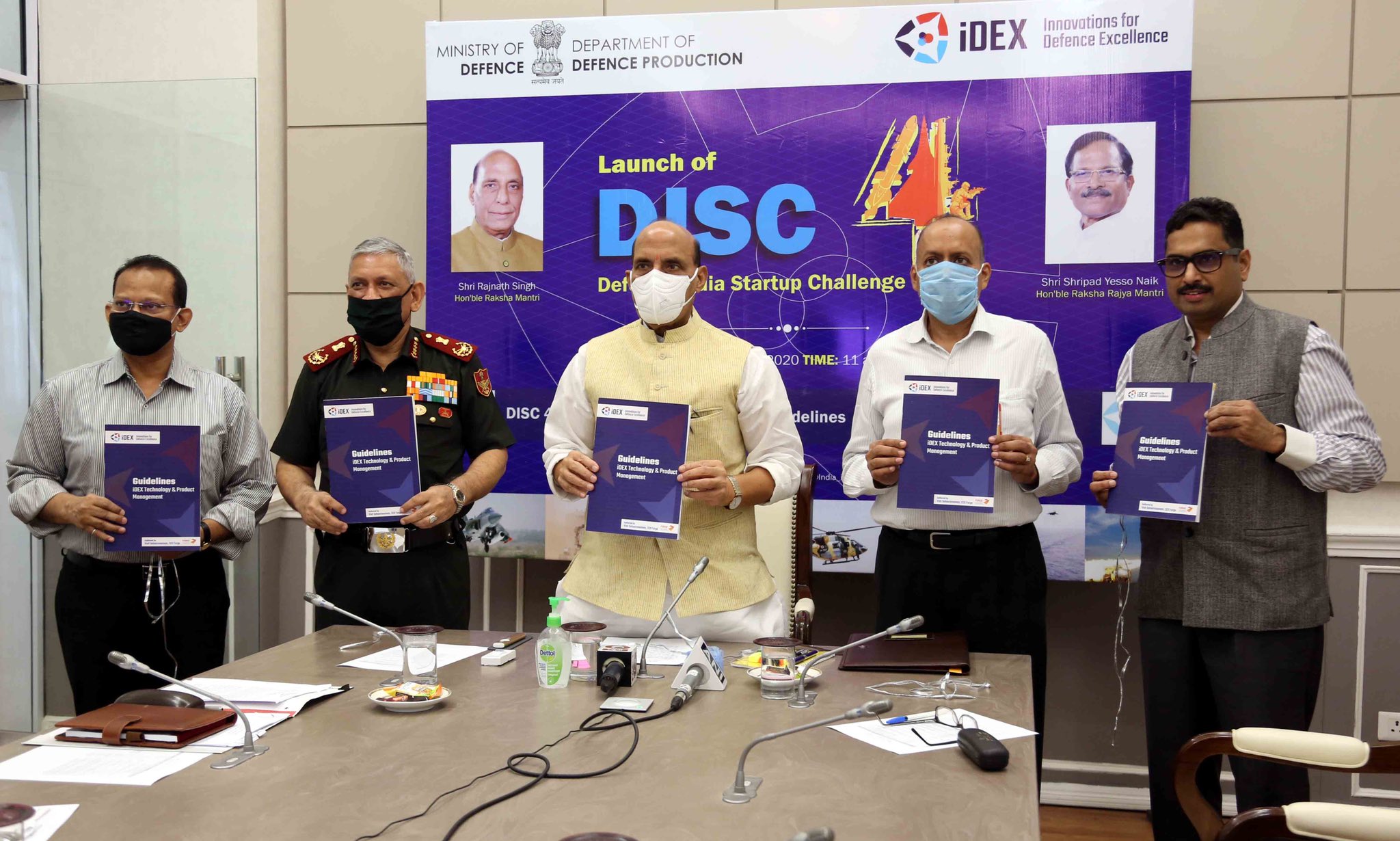 New Delhi: Raksha Mantri Shri Rajnath Singh launched the Defence India Startup Challenge (DISC 4) during the iDEX event, featuring the initiatives aimed at expanding the horizons of Innovations for Defence Excellence (iDEX) ecosystem in New Delhi today. iDEX4Fauji initiative and Product Management Approach (PMA) guidelines were also launched by the Raksha Mantri during the event. Each of these initiatives is expected to facilitate iDEX-DIO to scale up the program qualitatively and quantitatively.

iDEX4Fauji is a first of its kind initiative, launched to support innovations identified by members of the Indian Armed Forces and will bolster frugal innovation ideas from soldiers/ field formations. There are more than 13 Lakh service personnel working in the field and on borders, handling extreme conditions and equipment and would be having many ideas and innovations to improve such equipment. There was no mechanism to support such innovations. iDEX4Fauji would open this window and allow our Faujis to become part of the innovation process and get recognised and rewarded. Services Headquarters will provide support to the soldiers & field formations all over the country to ensure maximum participation.

Speaking on the occasion, Raksha Mantri Shri Rajnath Singh said that the iDEX initiative stands out as one of the most effective and well-executed defence Startupecosystem created in our country and it would be a decisive step towards achieving self-reliance in the spirit of the AtmaNirbhar Bharat campaign. Shri Rajnath Singh said, for the first time, an atmosphere has been created in the country when different stakeholders have been brought together to push for innovations in the defence sector. “In order to further strengthen our defence system and make it self- reliant the participation of private sector is also crucial. For this we have taken certain steps like partnerships with private sector, technology transfer, 74 % FDI through automatic route and the recently released negative list of 101 items for import ban after a stipulated period.” Raksha Mantri also said that only yesterday the government launched Defence Acquisition procedure 2020 which seeks to encourage the private industry to participate in the defence sector. Raksha Mantri also exhorted the Armed Forces to “make full use of the Defence Innovation Organisation (DIO) platform to meet their technological requirements and the Indian Startups to use this opportunity to become an integral part of our Defence enablers.”

Under Defence India Startup Challenge (DISC) 4, eleven challenges from Armed forces, OFB&DPSUs were thrown open to prospective startups, innovators, MSMEs alike to provide their innovative ideas on technologies which find their application in the defence sector. The challenges are as follows:

The iDEX initiative of the Department of Defence Production was launched by Prime Minister Shri Narendra Modi in April 2018 with the objective to encourage and nurture innovations in the Indian Defence sector and create an ecosystem where Startups, MSMEs and individual innovators could interact easily with the Indian defence establishment and provide the latest technological innovations for specific challenges experienced in operational environments through co-development and co-production of innovative solutions. The iDEX initiatives are executed by Defence Innovation Organisation, a Section 8 company of DPSUs BEL and HAL.

DIO has evolved and expanded the magnitude of its activities since inception in 2018:

Environment Ministerial on Air Pollution and Stubble burning with Delhi, Punjab, Haryana, Uttar Pradesh, Rajasthan to be held on 01st of October

iednewsdesk Jun 23, 2022
Swinburne University of Technology has won Bronze in the latest release of the Australian Human Rights Commission…

University of Wollongong: UOW to conduct study on the pandemic…