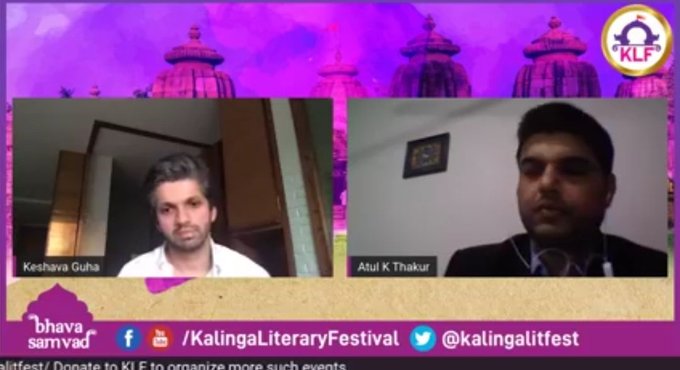 New Delhi: Kalinga Literary Festival hosted the eminent journalist and editor of Juggernaut Keshava Guha as the guest speaker and writer, columnist Atul K Thakur as moderator on KLF Bhava Samvad. Speaking over Keshava’s book ‘Accidental Magic’, Atul says, “People keep shifting their concentration from different things. The serious literary fiction is not seriously marketed as popular title. And most of our popular titles are trash.”

Keshava quotes on this by saying, “I don’t know how history will remember this but, from where we are right now, we are seeing technological advancement is not good. Smart phone addiction and social media addiction is completely man-made. Fiction is the total antitheses to social media. If you spend your whole day on smart phone, you cannot read a novel as you used to read. I’m the first reader of my book. Book is written partly in India and Partly in America. I trust and respect the reader, but I don’t things obvious for the reader. The book you read could be different from the book someone else reads… The conclusion and perspective you come up could be completely different from others.”

He continues with, “Audience of serious novel and serious fiction. Is watching reading. It is unambiguously a bad thing. Series and tv shows are not a substitute to reading. People who can otherwise read are spending their time in social media and web series. Most people who review fiction are not very comfortable talking about ideas. They’re more trained to review the characters. I have a very positive view of globalization in different aspects. Rest catching up with West’s happened in 1991. Global inequality has fallen. Bangladesh is the example of pure globalization success story. Optimism of globalization is cultures will mix and merge.

Atul comments, “We are all concerned with something happening in the country. We are not known to produce literary theory unlike the western world. Indian publishing market is the largest in southeast asia.”

“Delhi is the English language publishing hub for South Asia. After Pulwama attack the business with Pakistan has gone down. English language book market is very small in southeast Asia except in India. We Indians are not interested in our neighborhood. There’s a cultural arrogance that exists here,” concludes Keshava.

iednewsdesk Apr 12, 2021
The architect Francis Kéré, Professor of Architectural Design and Participation at the Technical University of…

ITMO: Top Places To Learn About Space in St. Petersburg

SPbPU: A lightweight and durable radiator for cooling electric vehicle…