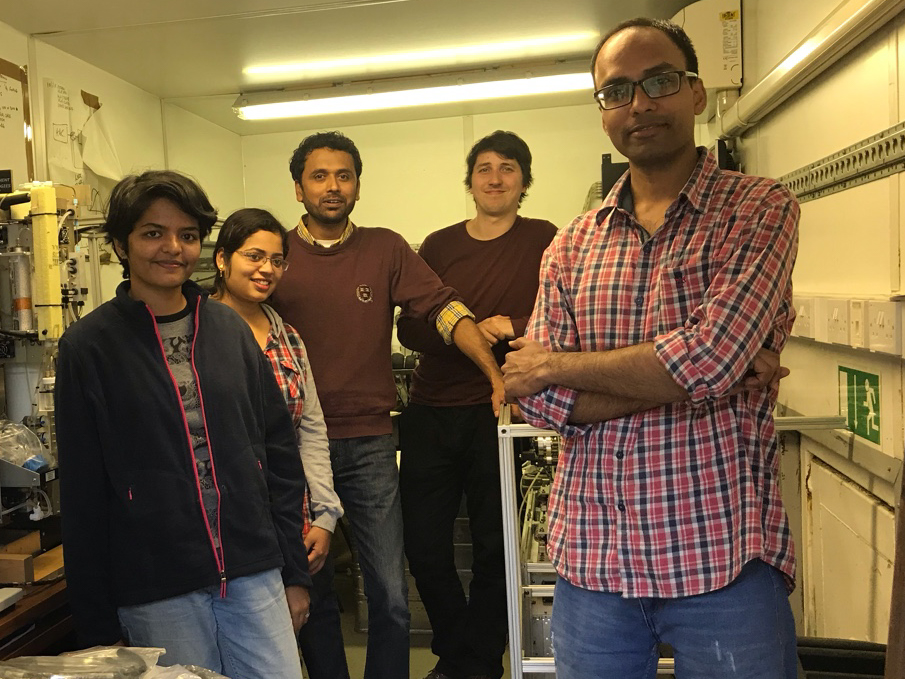 Chennai: An International Study led by Researchers from Indian Institute of Technology Madras has found Chloride to be the highest inorganic fraction in particulate matter, primarily responsible for haze and fog formation in Northern India including National capital Delhi.

The Study has been published in a prestigious peer-reviewed International Journal Nature Geoscience. A video of Dr. Sachin Gunthe, IIT Madras, explaining the important findings can be downloaded from the following link – https://fromsmash.com/Delhi-Pollution

Many studies in the past have identified PM2.5 (particulate matter or aerosol particles with diameter less than 2.5 micrometre) as a major pollutant, responsible for haze and fog formation over Indo-Gangetic plain including Delhi.

However, the role of PM2.5 and detailed chemistry of haze and fog formation over national capital was poorly understood. Such a lack of understanding was the biggest hurdle in developing the policies to improve the air quality and visibility. This study now greatly enhances our understanding about the precise role of PM2.5 in chemistry of fog formation, which will help policy makers to frame the better policies for improving the air quality and visibility over national capital.

With the approaching winter season, every year, most of the Indo Gangetic Plain invariably is engulfed in a dense fog and haze, particularly during the months of December and January. Over the national capital dense fog negatively impacts the air and surface transport resulting in huge financial losses and jeopardise human lives. Overall life comes to standstill during the dense fog!

The study, led by IIT Madras and was carried out in collaboration with Max Planck Institute for Chemistry, Germany; Harvard University, USA; Georgia Institute of Technology, USA; and Manchester University, UK.

The group of scientists and students deployed state-of-the-art instruments to measure the chemical composition and other important properties of PM2.5, along with relative humidity and temperature in Delhi, which were operated round the clock for one month with extreme care and dedicated expertise. The observations were then used in complex chemical models.

The findings were surprising for the researchers and unfolded the mystery of high chloride in PM2.5 and scientifically unravelled its precise role in fog and haze formation over Delhi. Dr. Sachin S. Gunthe, Associate Professor, Department of Civil Engineering, IIT Madras, who overall supervised and led the study and his team asked themselves a very basic question “If overall PM2.5 mass burden over Delhi is much lower than polluted megacity Beijing, then why visibility reduction is major problem in Delhi?”

Elaborating about the findings of this Research, Dr. Sachin S. Gunthe said, “We realised that despite absolute PM2.5 mass burden over Delhi being much less than other polluted megacities around the world, including Beijing, the pollution and atmospheric chemistry of Delhi is much more complex to understand. This work put forward importance of measurements and modelling approaches to scientifically conclude that half of the water uptake and visibility reduction by aerosol particles around Delhi is caused by the HCl emissions, which is locally emitted in Delhi potentially due to plastic contained waste burning and other industrial processes.”

Further, Dr. Sachin Gunthe added, “The real challenge was to delineate the role of high chloride in visibility reduction. The resolution of the mechanism was derived with the collaborative effort from all the partners in this project with various tools of analysis. This study is a demonstration of a successful large scale scientific collaborations that are so vital for climate studies.”

Elaborating on this research, Prof. R. Ravikrishna, Department of Chemical Engineering, IIT Madras, who was also part of the team that conducted this study, said, “With the results from first couple of days, it was very clear to us that Delhi is different; because generally for a polluted urban region like Delhi, one would expect sulfate to be highest inorganic fraction of particulate matter; however, we found chloride to be the highest inorganic fraction of particulate matter.”

The HCl from various sources combines with ammonia, which is emitted in great amounts over this region. Thus, ammonium chloride (NH4Cl) so formed condenses to aerosol and exponentially increase the water uptake ability of aerosol particles resulting increase in size, eventually leading to dense fog formation. In the absence of the excess chloride, the fog formation otherwise would be suppressed significantly.

Enhancement in understanding of water uptake by particles in Delhi is of enormous significance as very poor visibility over this region leads to financial burden and loss of human lives. Further, not only this study emphasises plastic burning emits toxic substances in the atmosphere impacting human health but also these emissions are for the first time linked to visibility and climate.

Speaking about the findings, Dr. Sachin Gunthe said, “Scientifically, our job is half done. Plastic-contained waste burning can emit highly toxic chemicals called ‘dioxins’, which can accumulate in food chain causing severe problems with reproduction and immune system. We further need to investigate in this direction. Enhancement in fundamental science of air pollution should be given importance as much as technology development to tackle pollution.”

Dr. Sachin Gunthe further added, “Given that we find plastic burning as a potential cause of the reduced visibility, we hope these findings will help policy makers to efficiently enforce and implement policies that are already in place towards regulating open burning of plastic contained-waste and other potential chlorine sources.”

The study identifies waste burning as a major pollutant source, which is responsible for emissions of aerosol precursors as well as other toxic substances such as chlorinated dioxins and other persistent pollutants that affect human health. The study also emphasised need to improve the policies related to air pollution, solid waste management including e-waste, and food safety to systematically address the environmental issues in India.

PHOTO CAPTION: The IIT Madras and The University of Manchester team members in advanced state-of-the-art aerosol laboratory, which was setup in Delhi to investigate the science behind the visibility reduction

Indian Institute of Technology Madras (IITM) was established in 1959 by the Government of India as an ‘Institute of National Importance.’ The activities of the Institute in various fields of Science and Technology are carried out in 16 academic departments and several advanced interdisciplinary research academic centres. The Institute offers undergraduate and postgraduate programmes leading to B.Tech., M.Sc., M.B.A., M.Tech., M.S., and Ph.D., degrees in a variety of specialisations. IITM is a residential institute with more than 580 faculty and 9,500 students. Students from 18 countries are enrolled here. IITM fosters an active entrepreneurial culture with strong curricular support and through the IITM Incubation Cell.

IITM has been ranked No.1 in the ‘Overall’ Category for the second consecutive year in India Ranking 2020 released by National Institutional Ranking Framework, Ministry of Education, Govt. of India. The Institute has also been ranked No.1 in the ‘Engineering Institutions’ category in the same Rankings for five consecutive years – 2016, 2017, 2018, 2019 and 2020. It was also adjudged as the ‘Top innovative Institution’ in the country in Atal Ranking of Institutions on Innovation Achievements (ARIIA) in 2019 and 2020. ARIIA Ranking was launched by the Innovation Cell of Ministry of Education.