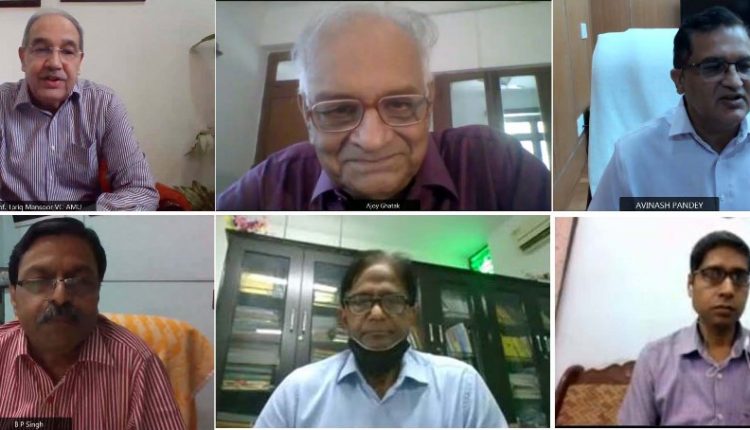 Aligarh : The celebrations are taking place worldwide for completing 100 years of Einstein’s Nobel Prize as Albert Einstein received the 1921 Nobel Prize in Physics “for his services to theoretical physics and especially for his discovery of the law of the photoelectric effect”. The Physics Department of AMU could not be left without becoming a part of this celebration and organized a programme on the topic “Centenary Year of Nobel Prize to Albert Einstein”, (1921-2021) today.

Prof Tariq Mansoor, Vice Chancellor, AMU inaugurated the programme and graced the occasion. He presented his views and highlighted Einstein’s achievements and mentioned Einstein’s dedication towards Physics. He also discussed the importance of science in everyday human life and mentioned the practical applications of Physics in medicine, such as CT scan, Colour Doppler, ECG, MRI etc.

Prof Mansoor emphasized that there should be a good work culture for young scientists and we should maintain a congenial atmosphere for them. Einstein always appeared to have a clear view of the problems of physics and the determination to solve them, he added.

Prof Ajoy K. Ghatak, Chief Guest of the programme and Professor Emeritus at Indian Institute of Technology Delhi and Shanti Swaroop Bhatnagar Awardee, delivered informative talk on “Evolution of Quantum theory” that was actually related to Einstein’s research. The talk was so informative and fundamental that more than 250 participants were present in the talk. The students appreciated the talk and understood the basics of quantum mechanics. He forcefully mentioned that poverty can only be alleviated through the use of science and technology.

Guest of Honour, Prof Avinash Chandra Pandey, Director, IUAC New Delhi, presented his views regarding Einstein’s contributions in the field of physics in general. He also described the facilities being used by the members of the Physics Department at the Pelletron accelerator facility of Inter University Accelerator Centre, New Delhi.

Prof M Ashraf, the Dean, Faculty of Science emphasized that we should pay tribute to all Indian Scientists who contributed to Science and Technology. He also mentioned the contribution of various Indian scientists as well. Further, he also mentioned that in order to become a developed nation we still have a long path to go.

Prof Bhanu Prakash Singh, Chairperson, Physics Department, in his welcome address introduced the speaker. Prof. Singh talked about the contribution of Einstein to the field of Physics and also about connection to the Physics Department AMU Aligarh.

As a part of the celebrations, the Department of Physics organized a talk on the topic “Science, Society and Einstein” by Dr CM Nautiyal (Programme Consultant , Science Communication) Indian National Science Academy, New Delhi on 18thSeptember.

Dr Jai Prakash presented a vote of thanks and convened all the activities undertaken for the “Centenary Year of Nobel Prize to Albert Einstein” celebration programme, in the department.