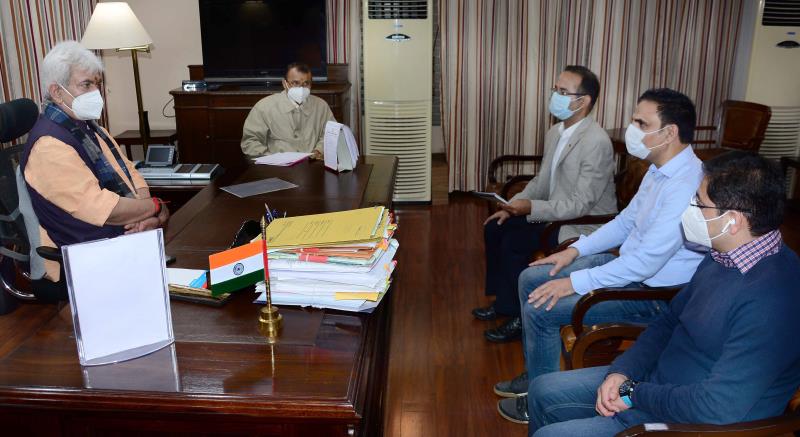 A deputation of Jammu and Kashmir Administrative Service (JKAS) Officers Association led by its General Secretary, Shahid Saleem put forth various demands pertaining to their service and career progression.

The Lt Governor held a detailed discussion with the visiting officers’ delegation and assured that all the genuine demands and issues put forth by them would be looked into meticulously for their early redressal.

Speaking on the occasion, the Lt Governor also urged the officers to work with dedication for public welfare and ensure accountability and transparency while discharging their duties.

Similarly, another deputation of Resident Doctors Association called on the Lt Governor and discussed several issues related to their service, security, accommodation, besides other matters related to their profession.

The members of the deputation apprised the Lt Governor about the present health scenario in Jammu and their services during COVID-19 pandemic.

The Lt Governor appreciated the role of resident doctors during the pandemic and hoped that the association would be instrumental in providing best health care to the citizens of Jammu and Kashmir.

The Lt Governor gave a patient hearing to the members of the Employees’ Union and assured that the genuine service matters brought into his notice would be looked into for redressal.

The Lt Governor observed that the UT Government is working for the welfare of the people and the genuine developmental needs and issues of the people would be addressed on merit.