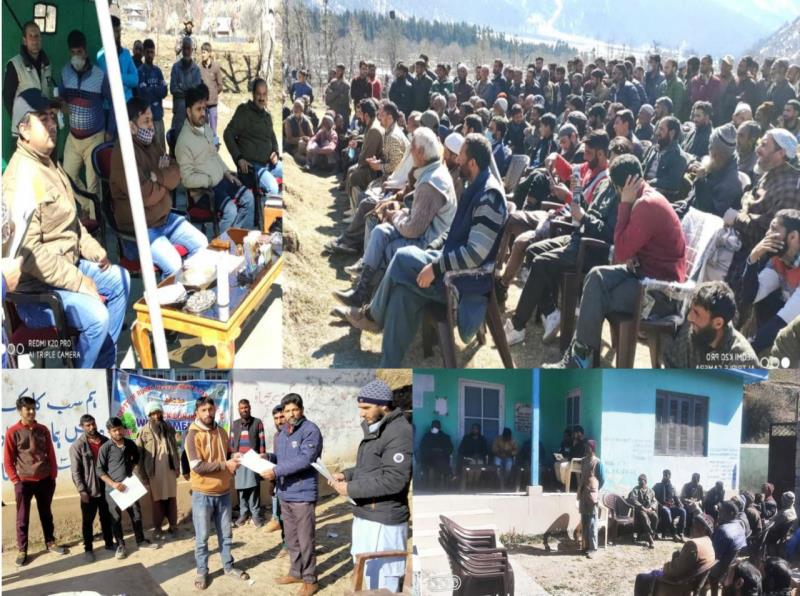 The People from different sections of society including the prominent citizens, elected PRI members, locals of the area thronged the programme and put forward their issues before the DC.

They apprised the DC of various issues pertaining to the upgradation of the local infrastructure of health, education, PHE and other key sectors.

The specific issues highlighted by the people of the Marwah area is about the road connectivity of the area via Dachhan, prevailing absenteeism in majority of government offices, timely payment of SBM and MGNREGA wages, augmentation of the health care system and regularization of chopper facility in the area.

After listening to the issues of people, DC Kishtwar redressed many grievances on the spot and passed a slew of directions to the concerned district officers for timely resolution of other projected grievances.

He assured them that the functioning of the various government offices in the area will be streamlined without any fail and stringent action will be taken against the erring officials.

He directed SDM Marwah and PRIs to ensure the punctuality of the employees by regular monitoring and strict vigil of the functioning of the various offices in the area.

On the issue of the payment of the SBM and MGNREGA wages, he directed ACD Kishtwar to ensure the timely payment of the wages in favour of beneficiaries so that their basic livelihood is not disrupted.

He further said that the chopper facility for the effective and efficient connectivity of the area for the medical and other essential services has been ensured by district Administration and it would try to increase the frequency of sorties in the area.

Besides, the DDC directed XEn PMGSY to expedite the pace of construction of road to the area and complete it in the stipulated time period so that the suffering of the people would be lessened. He said that mobile connectivity and road connectivity is on the priority and he will leave no stone unturned in this direction.

Similar programme was held at Chingam Chatroo under the chairmanship of SDM, Chatroo Inderjeet Singh Parihar.

Tehsildar Chatroo, Suman Sharma, besides other officers were present on the occasion.

At block headquarter Paddar, the block diwas was held under the overall supervision of SDM Paddar, Varunjeet Singh Charak in presence of BDC chairman Arpan Singh Rana, Tehsildar, Major Singh and other officers.

At the block headquarter Bonjwah, weekly Block Diwas programme was also held and a number of grievances were redressed under the supervision of Tehsildar Bonjwah Irshad Ahmed Butt.

ETU “LETI”: Yo-ho-ho and Satellite Signals: ETU “LETI” Scientists Figured out How to Prevent Accidents and Smuggling at Sea

University of Freiburg: The trinational Eucor – The European Campus consortium is expanding its offerings for international doctoral candidates with “EURIdoc”