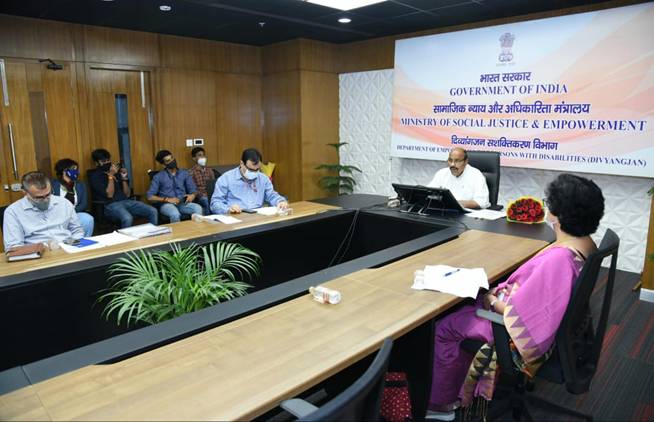 New Delhi: Two ‘Samajik Adhikarita Shivir’ for distribution of aids and assistive devices to ‘Divyangjan’ under the ADIP Scheme and to senior citizens under Rashtriya Vayoshri Yojana were conducted today in Farrukhadad (U.P) and Amritsar (Punjab). The camps were organized by the Department of Empowerment of Persons with Disabilities (DEPwD) in association with ALIMCO and District Administration of Farrukhabad and Amritsar respectively.

Chief Guest of the function Dr. Virendra Kumar, Union Minister for Social Justice and Empowerment, Govt. of India inaugurated both the camps virtually through video conference in the presence of local public representatives of the districts. The distribution will be done at Block/Panchayat level by following the SOP prepared by the Department in view of COVID-19 Pandemic.

First camp was organized at Royal JJ Guest House, Fatehgarh in Farrukhabad District of Uttar Pradesh wherein Shri Mukesh Rajput, Member of Parliament, Farrukhabad presided over the function and was physically present at the venue of main function.

A total of 6530 aids and assistive devices valued at Rs.1.46 crore will be distributed free of cost to 288 Divyangjan and 756 Senior citizens of Farrukhabad by following the SOP prepared by the Department in view of COVID-19 Pandemic.

Addressing on the occasion Union minister Dr. Virendra Kumar said that Divyangjan are the integral part of Human resource. He said that, ministry is working on the vision of ‘Sabka Saath Sabka Vikas’ of Prime Minister, and has implemented various welfare schemes for developing an inclusive society and empowerment of persons with disabilities.

Union Minister emphasised on Skill training programme for empowerment of Divyangjan and brings them in the mainstream of society for overall development of the country. Minister added that 5043 Divyangjan have been imparted Skill Training in the State of Uttar Pradesh for value of worth Rs.4.45 crore. Rs. 49.07 crore value of funds have been released under Sugamya Bharat Abhiyan for 137 government buildings in Uttar Pradesh. Informing about various initiatives taken across the country for Divyangjan Union Minister informed that 709 Railway stations and 686 websites have been made accessible under Sugamya Bharat Abhiyan and Scholarship of worth Rs.140.04 crore has been provided to 37229 Divyangjan in Uttar Pradesh.

Another distribution camp was inaugurated by Union Minister Dr. Virendra Kumar for proving aids and assistive devices to 1803 Divyangjan under ADIP Scheme valuing Rs.1.83 crore of appliances was organized at Amritsar, Punjab.

Addressing on the occasion Union minister said, central government has taken several steps for the betterment of the Divyangjan. In addition to the ADIP scheme other schemes/programmes are also being run by the Department of Empowerment of Persons with Disabilities, such as DDRS scheme, SIPDA scheme, skill development training, scholarship scheme, Accessible India campaign etc. An amount of Rs 19.82 crore has been released for 20 government buildings of Punjab under Accessible India campaign. Scholarship worth Rs 5.91 crore has been provided to 2528 Divyang students in Punjab.