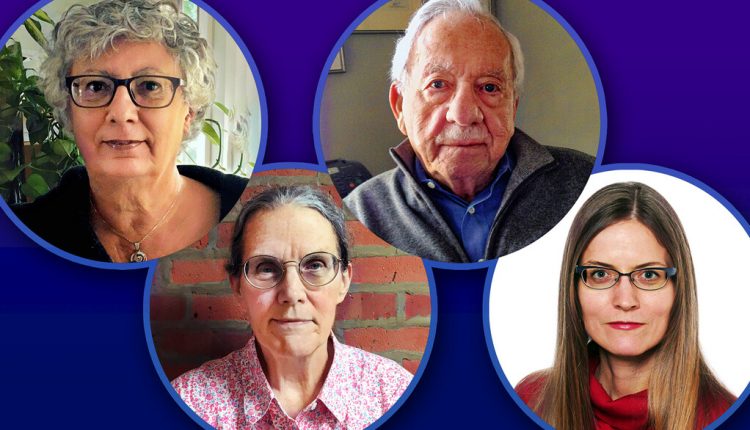 Four Yale professors whose teaching and mentorship have inspired generations of students were recently honored with William C. Clyde DeVane Medals from the university’s chapter of Phi Beta Kappa.

At this year’s ceremony, conducted via Zoom on June 5, the recipients of both the 2020 and 2021 DeVane Medals were honored (the 2020 awards were bestowed belatedly due to the COVID-19 pandemic).

The 2020 awardees are Joseph LaPalombara, the Arnold Wolfers Professor Emeritus of Political Science and Management, and Dana Angluin, now a professor emeritus of computer science who was an active faculty member at the time she was selected for the award. The 2021 DeVane Medalists are Hazel Carby, the Charles C. & Dorathea S. Dilley Professor of African American Studies and American Studies Emerita, and Miki Havlíčková, the Nathan Jacobson Senior Lecturer in Mathematics.

The DeVane Medal has been conferred annually since 1966. William Clyde DeVane was dean of Yale College from 1938 until 1963 and was a long-time president of the Yale chapter as well as president of the United Chapters of Phi Beta Kappa.

Bringing the world to Yale

Joseph LaPalombara is a specialist in comparative politics, group interest theory, and foreign investments made by global firms. He earned his undergraduate degree from the University of Illinois and his Ph.D. from Princeton University, and taught at Oregon State and Michigan State universities before joining the Yale faculty in 1964. He taught in Yale’s political science department and later at the School of Management, and twice served as the chair of the Department of Political Science. He was director of the Institute for Social and Policy Studies from 1987 to 1991. Although he formally retired in 2001, he taught an undergraduate seminar at the School of Masnagement until 2019.

“…Professor LaPalombara brought the world to Yale,” said Phi Beta Kappa’s DeVane Medal citation, which was read by Margaret Clark ’77 Ph.D., the John M. Musser Professor of Psychology and head of Trumbull College. “He is the author of scores of books and articles, a top American authority on Italian politics, and more widely, a respected authority on comparative political theory, the dynamics of bureaucratic politics, and the political significance of the multinational corporation. … He was never afraid of challenging received viewpoints and his work often resulted in an overturning of conventional wisdom in his field. Of his many books, perhaps none captures his approach and special genius and charm better than did ‘Democracy, Italian Style,’ his 1988 book in defense of Italy’s ‘fascinating, paradoxical, and ultimately logical’ democracy. His work reflects a verve, wit, and iconoclasm about which dozens of reviewers have raved…”

The citation also lauded his contributions as a teacher and Yale colleague, noting, “Generations of students and colleagues have found him to be a remarkable and constructive reader of their work. And when the university community needed him, [he] was always there, pressing those in authority to make Yale live up to its best traditions and highest aspirations.”

Over his more than 50-year career at Yale, LaPalombara said one of his greatest joys was teaching undergraduate students.

“My students taught me much more than I was able to give them,” remarked the political scientist after learning he won a DeVane Medal. “If I’m a decent human being, it is because of the undergraduates I was teaching.”

Since retiring, LaPalombara has been an active member of the Henry Koerner Center for Emeritus Faculty, where he ran a film series for many years with the late American studies professor Alan Trachtenberg. This year, he published a children’s book, “Fescue,” about a blade of tall grass that dared to be different. The book is based on one of the many stories LaPalombara created and shared with his children on long drives to Maine for yearly family vacations. The book was edited by his son, David LaPalombara, who teaches art at Ohio University, and was illustrated by David’s student, Callie Smith.

Dana Angluin has been a member of the Yale faculty since 1979. She earned her B.A. and Ph.D. from the University of California-Berkeley. Her scholarly interests include machine learning and computational learning theory. Her algorithmic modeling and analysis of learning tasks gives insights into the phenomena of learning, and she has also explored map-learning by mobile robots. In 2011, Angluin was awarded Yale College’s Dylan Hixon ’88 Prize for Teaching Excellence in the Natural Sciences, and last year the Harwood F. Byrnes/Richard B. Sewall Prize.

“[I]t is extremely evident that Professor Angluin cares deeply about the success of her students,” Jeffrey Zhou ’21, who was a student in Angluin’s introductory discrete math course for computer science majors, said in the citation. “For many students, this class is the first exposure they have to discrete math, which requires a more problem-solving-oriented mindset compared to the computational math classes that most students are used to. Professor Angluin integrates her years of experience teaching this class to seamlessly introduce novel concepts in a way that builds naturally upon preexisting knowledge. Furthermore, she tailors each year’s schedule to the students. … Professor Angluin has been one of the most caring and supportive professors I have had at Yale, despite her difficult job teaching a core introductory class to students from a variety of backgrounds.”

“I am lucky to have had the opportunity to teach undergraduates for as long as I have,” said Angluin about her DeVane Medal. “By now most of them realize that I have always learned more from them than vice versa. And I am extremely grateful!”

Teaching and mentorship that are ‘legend’

Hazel Carby is considered a pioneer in the fields of feminist literary studies and Black studies whose work has “paved the way to thinking about African American women writers as cultural workers whose interventions were literary but importantly also social and political as well. Her books on this subject became classics in the field,” according to her DeVane Medal citation, which was read by Clark at the ceremony.

Carby received her undergraduate degree from Portsmouth Polytechnic and her Ph.D. from Birmingham University in England. She came to Yale in 1989. Her books include “Reconstructing Womanhood: The Emergence of the African American Woman Novelist,” “Cultures in Babylon: Black Britain and African America,” “Race Men,” and “Imperial Intimacies: A Tale of Two Islands.”

“Hazel Carby’s mentorship of students and colleagues across several decades at Yale is legend,” her citation read. “Her former students now constitute the leadership of African American studies nationally. Her energy, commitment, and vision gave shape to the program at Yale as a forward-looking, diasporic formation — Africa, Caribbean, Atlantic World, U.S. — and it was her skilled leadership that ushered the program through its transition to departmental status and into its current form as a Ph.D.-granting unit.”

In an interview with Yale News at the time of her retirement in 2019, Carby said that she learned daily from her students. “If you are the type of teacher who is willing to learn as much from them as much as to teach them then their whole world opens up. If you don’t think you’re just there to impose your knowledge, but you actually listen to their response, you will learn an awful lot. It keeps you young.”

Miki Havlíčková joined the Yale faculty in 2008 after earning her B.S. and Ph.D. from the Massachusetts Institute of Technology. Among the courses she teaches are calculus, abstract algebra, and Galois theory. In 2016, she was awarded Yale College’s Richard H. Brodhead ’68 Prize for Teaching Excellence by a Non-Ladder Faculty Member. She also serves as associate director of undergraduate studies in the math department.

In her DeVane Medal citation, Melissa Lu ’21 described Havlíčková as “one of the best teachers I have ever had.

“[T]o many of her students, she is affectionately known as Miki, someone who has helped us grow as students and humans, whether it’s in a pandemic or if we somehow got ‘abc’ for a math problem instead of an actual number… Miki inspired me to pursue mathematics, and her class taught me how to study for literally all of my other classes. She would step through the calculus concepts and make them concrete with examples. She makes calculus and abstract algebra interpretable and fun! She is her students’ greatest champion; she would listen to our feedback from check-in surveys and adjust the course accordingly, making sure to communicate all the changes made. In the pandemic, Miki adapted her courses to the virtual setting. For example, she prepared pre-tutorial sessions for smaller groups of students to clarify concepts. … From all the undergraduates, we hope that this award shares our heartfelt thanks. Your instruction is meaningful and important and it has changed the trajectory of so many of our lives.”

Of being honored with the DeVane Medal, Havlíčková said, “It has been a true joy to support Yale students in exploring the beauty of mathematics. I am honored that they selected me for the award, especially as I feel it is a recognition of the joint effort of many dedicated faculty, staff, and students that I have had the privilege to work with in my teaching.”

Diplomas were awarded at the Institute of Economics and Law