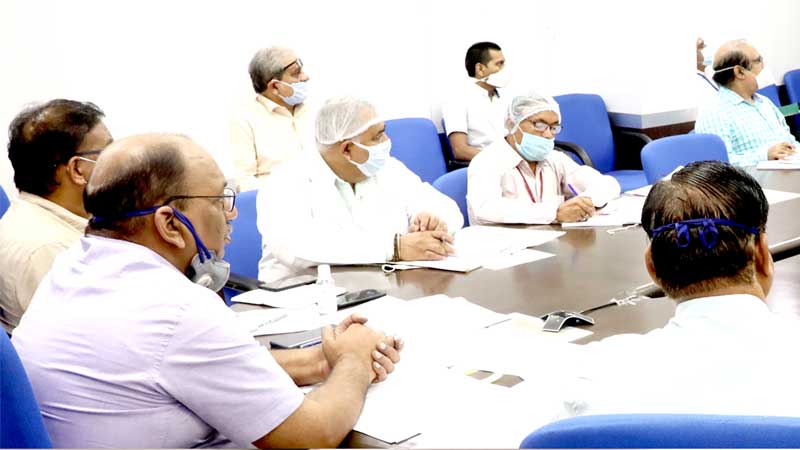 Bhopal : Minister of State for AYUSH (Independent Charge) Shri Ramkishore Kavre has issued instructions that herbal gardens should be developed by planting medicinal plants in every district, so that Madhya Pradesh becomes known in the country for developing herbal gardens. Shri Kavre said that he too will encourage farmers to plant medicinal plants like fruit-bearing plants. Minister of State Shri Kavre was reviewing the Department of AYUSH through video conferencing on Wednesday from Balaghat. AYUSH Secretary-cum-Commissioner Shri M.K. Agarwal and AYUSH officers from all the districts and divisions were connected through video conferencing at Mantralaya.

Minister of State Shri Kavre said that the marked 362 health and wellness centres should be maintained and developed as models. As many as 850 centres are to be prepared in the next five years in a phased manner. For this, building repair works etc. should be undertaken in which the participation of gram panchayats is ensured. He informed that the arrangement for yoga instructor will be made on honorarium basis.

Shri Kavre directed that the new AYUSH Grams should begin within the stipulated time. He congratulated the team as not a single Covid patient was found in the existing AYUSH Gram and also said that good performers will be honoured and action will be ensured against those who are negligent. He said that the Nodal Officer and AYUSH Officer should visit 45 identified AYUSH Grams and Divisional-District Officer should get the work done under their direction. Nurseries must be developed in colleges so that medicinal plants can be found. Nurseries should be developed in every college.

Minister of State Shri Kavre said that Arogya Kashayam Kadha should be made available to the patients through Covid Care Centre. So far more than 10 thousand patients have been benefited which the Government of India has also appreciated. The district offices can send their demand for kadha supply to the headquarters through the divisional officer.

Minister of State Shri Kavre directed to register feedback in the AYUSH Sanjeevani App of the Ministry of AYUSH. He has instructed all the divisional officers to visit and monitor the districts night halts. He informed that the app is being developed soon by MAPIT through which I can get direct feedback of various types of information.

Shri Kavre said that over 1700 OPDs should be fully operational. Medicines and Trikatu powder should be made available through OPD’s. Specialists will be made available according to number of male, female patients and children besides according to the ailment in the OPD. Shri Kavre said that 16 types of diseases should be identified and webinar of experts should be organized. At least one webinar of experts must be organized before August 15 on any one subject. Master trainers of subject experts must be prepared through whom groups of 30 each should be imparted training.

Minister of State Shri Kavre said that the outline of the contribution of AYUSH department in creating Atmanirbhar Madhya Pradesh on the instructions of Chief Minister Shri Shivraj Singh Chouhan for Atmanirbhar Bharat should be prepared by August 5. He directed to complete the buildings under construction within six months. He also gave instructions to use the budget in time-limit. He instructed the principals to strongly monitor online classes.

Dr. Neeraj Yadav, posted in the Government Ayurveda dispensary, Babai of Hoshangabad district, was suspended by the state government on July 29, after being charged with negligence in maintenance of records during the inspection of the dispensary on July 24 by the Minister of State for AYUSH, Shri Ramkishore Kavre. Shri Kavre had given instructions in this regard at the time of inspection. Order in this regard has been issued today.