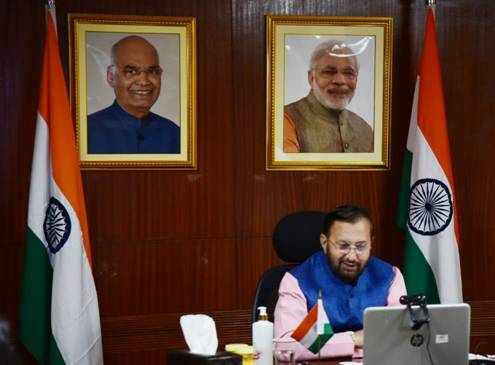 Developed countries must implement the financial and technological commitments under UNFCCC and Paris agreement: Prakash Javadekar

New Delhi: The fourth edition of the virtual Ministerial on Climate Action witnessed countries exchanging views on how countries are aligning economic recovery plans with the Paris Agreement and the critical enabling conditions to ensure continued climate action. The meetingwasco-chaired by European Union, China and Canada to advance discussions on the full implementation of the Paris Agreement under the United Nations Framework Convention on Climate Change (UNFCCC) and to demonstrate continued political commitment to global climate action.

Union Environment Minister, Shri Prakash Javadekar, representing India said that our country has taken very significant steps for combating climate change and will continue its efforts in the future also. Shri Javadekar called upon developed country parties, once again, to do their part as envisaged under UNFCCC and its Paris Agreement, for extending financial and technological support to developing countries. “The promise of USD 1 trillion by 2020 has not been fulfilled so far, and I hope that in the remaining 5 months of 2020, the promised amount is mobilized and delivered, for further strengthening climate actions in developing countries.”, stressed the Environment Minister.

Highlighting India’s efforts, the Environment Minister said that India has achieved reduction of 21% in emission intensity of its GDP between 2005 and 2014, thereby achieving its pre-2020 voluntary target.Further, India’s renewable energy installed capacity has increased by 226% in last 5 years and stands more than 87 Gigawatt.“The share of non-fossil sources in installed capacity of electricity generation increased from 30.5% in March 2015 to 37.7% in May 2020 and our Prime Minister has further announced the aspirational target of increasing our renewable energy capacity to 450 GW.”, pointed Shri Javadekar.

The minister further said that we have provided 80 million LPG connections in rural areas, providing them with clean cooking fuel and healthy environment. “India’s total forest and tree cover is 8,07,276 sq. km. which is 24.56% of the total geographical area of the country; More than 360 million LED bulbs have been distributed under UJALA scheme, which has led to energy saving of about 47 billion units of electricity per year and reduction of 38 million tonnes of CO2 per year.”, said the Environment minister.

Highlighting India’s efforts towards cleaner fuel Shri Javadekar said that India has also leapfrogged from Bharat Stage-IV (BS-IV) to Bharat Stage-VI (BS-VI) emission norms by April 1, 2020 which was earlier to be adopted by 2024.The minister also highlighted how India had levied a coal cess of INR 400/- as, part of one of the most explicit green initiatives & this is now subsumed under Goods and Services Tax(GST).“Under Smart Cities Mission, first-of-its-kind initiative – Climate Smart Cities Assessment Framework 2019 has been launched which intends to provide clear roadmap for cities and urban India towards combating climate change through adoption of both mitigation and adaptation measures.” told the Minister at the meeting.

The fourth edition of the meeting was attended by Ministers and representatives of about 30 countries and was held virtually for the first time in view of the ongoing pandemic. The purpose was to ensure that progress is made on climate action.