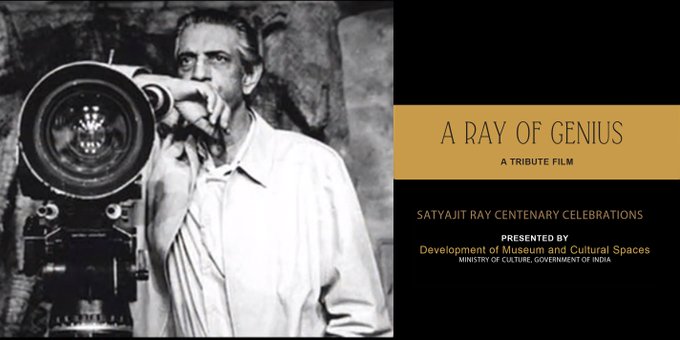 New Delhi: Ministry of Culture’s Development of Museums and Cultural Spaces (DMCS) digitally launched the short film ‘A Ray of Genius’ to mark the beginning of the centenary celebrations of Satyajit Ray today.

While releasing the film online, CEO of DMCS Shri Raghvendra Singh said that the short-film highlights Ray’s filmmaking genius as well as his eclectic achievements across literature, art, music and design that have been put together by professionals from Kolkata and Mumbai. Award winning director Aniruddha Roy Chowdhury and editor Arghya Kamal Mitra have created this film with the help of Sandip Ray and the Society for the Preservation of Satyajit Ray Archives. The film also features stunning photographs by Nemai Ghosh, Ray’s chronicler for three decades showcasing the great filmmaker at work, sourced with the help of the Delhi Art Gallery.

He further stated that, “Satyajit Ray lives on in our memory through films like Pather Panchali, Charulata, Teen Kanya, Sonar Kella and the ‘Apu Trilogy’. With Pather Panchali (Song of the Road), Indian cinema was launched on the world stage. The Development of Museums and Cultural Spaces, Ministry of Culture, is delighted to present ‘A Ray of Genius’ as a tribute to the versatility of Satyajit Ray as motion-picture director, writer and illustrator. With this screening, we launch the birth centenary celebrations of Satyajit Ray today on May 2, 2020”, Shri Raghvendra Singh added.

On the occasion, an official Facebook Page and YouTube Channel of DMCS were also launched, which will show case other activities during the Centenary Celebrations of Satyajit Ray. The viewer may log onto the following links to view, like and follow them.

NMCG & NIUA organized IDEAthon on ‘The Future of River Management’