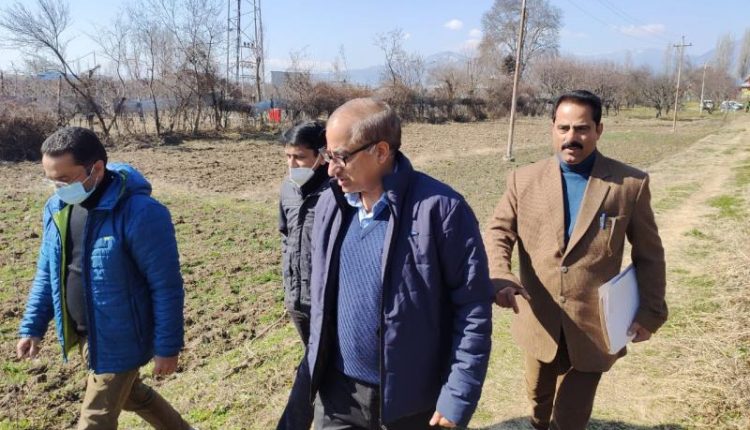 The DG took stock of daily routine work in the offices and stressed on accountability and transparency in work. He also took stock of various nursery operations and instructed the staff to speed up the pruning, hoeing and other nursery operations in the departmental Nurseries/Orchards and focus on orchard sanitation and production of quality planting material.

He further advised the field functionaries of the Department to reach out to common orchardists and provide them technical knowhow particularly about pruning, training of fruit plants and importance of orchard sanitation.

While inspecting Fruit Plant Nursery Bandipora, the DG expressed his displeasure over the condition of the nursery.

Taking strong note, He directed the Chief Horticulture Officer Bandipora to improve the work culture in the district. He further added that the special focus should be laid on timely transplantation of rootstocks and High-Density Plantation besides producing quality planting material.

DG also took stock of renovation work being carried out at Chief Horticulture Office Sopore and asked the executing agency to prioritize the completion well in time besides maintaining the quality.

He further directed the field functionaries of the Department to ensure that genuine pesticides and quality inputs are made available to the orchardists of the valley and informed that in this regard the Department has already initiated a massive drive against unscrupulous dealers and defaulters are being booked under law.