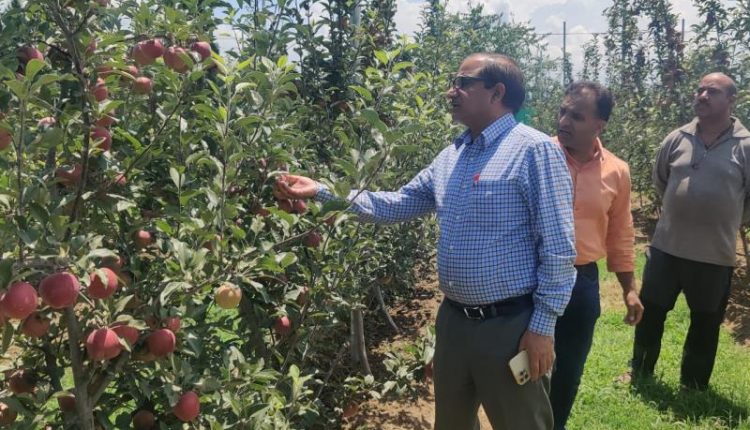 SRINAGAR : In pursuance to the efforts to reach out to the farming community, the Director General (DG) Horticulture Kashmir, Aijaz Ahmad Bhat today visited Tangmarg Sub-division of district Baramulla, where he attended a training/awareness camp.

The camp was attended by a good number of progressive orchardists, particularly those involved in High Density farming.

The main focus of the training camp was summer care of HD Apple orchards. During the training different aspects of summer care like summer pruning, fertigation, thinning out, mulching etc. were discussed and demonstrated.

While addressing the farmers, the DG Horticulture highlighted the importance of capacity building of farmers by holding such training camps.

He also elaborated the different departmental scheme and advised the farmers to keep close liaison with the field functionaries of the department.

Later, the DG thanked all the participants and directed the concerned officers of the department to organize such programmes periodically.

The DG during the visit was accompanied by various officers of the Department.

iednewsdesk Jun 25, 2022
Scott Morrison and Barnaby Joyce were the most unpopular leaders of any party since 1987, new analysis of the…

ANU: Weather and climate modelling powers up at ANU