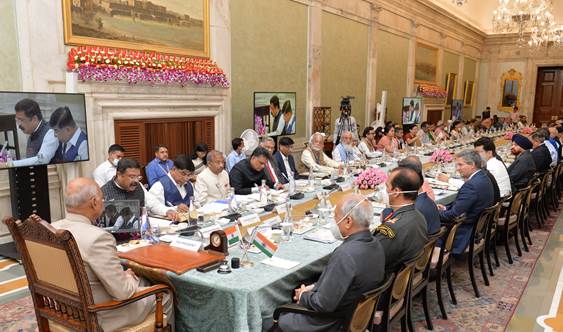 New Delhi: A two-day Conference of Vice-Chancellors of Central Universities and Directors of Institutions of National Importance concluded today. The President of India Shri Ram Nath Kovind inaugurated the conference on 7th June, 2022.

In his concluding remarks, Shri Pradhan expressed gratitude to the President of India for his participation and guidance in the Visitor’s Conference. He said that the age of incremental change is gone and called upon higher educational institutes to target exponential growth towards building future-ready workforce. Speaking about the challenges and opportunities in the new world propelled by technology, he said that Indian has shown its technological prowess in various initiatives like UPI, Direct Benefit Transfer, Aadhar and the we must build upon this strength and make a future-ready workforce to embrace the changes arising out of Industrial Revolution 4.0. Speaking about entrepreneurship, he mentioned the rising number of unicorns in the country as an indicator of a thriving entrepreneurial ecosystem and called for preparing the students to be job givers and not only job seekers. The Minister also spoke about various initiatives taken by the Government in the realm of digital education and called for leveraging technology to further decolonize education. He also called for further strengthening alumni network and engage efforts being taken in the area of internationalization of education in India, including the Study in India program.

In different sessions, the Conference deliberated on various topics such as – International rankings of Higher Education Institutions; collaboration between Academia-Industry and policymakers; Integrating School, Higher and Vocational education; Education and Research in emerging and disruptive technologies.

On the second day of the conference, Mr. Nunzio Quacquarelli, Founder and CEO, QS ranking gave a presentation on International rankings of Higher Education Institutions: Indian Universities in QS World University Rankings. It included suggestions on how Indian institutions can improve their performance and attain better world rankings. The moderation by Prof. Abhay Karandikar, Director IIT Kanpur was very evident and articulated comprehensively on how our institutions have been working towards the path of progress. He said that India has improved its performance in the Global rankings at an overall level.

Prof. Virendra Kumar Tewari in his presentation on the topic of Collaboration between Academia-Industry and Policy Makers gave an insight into the idea when academia, industry, and policymakers work together, universities can become powerful engines for knowledge, employment, and innovation. The presentation was moderated by Shri K.Radhakrishnan.

In the last session, Shri V. Kamakothi in his presentation on the topic of Education and Research In Emerging and Disruptive Technologies discussed the potential and need for Artificial Intelligence, Data Science, Simulation and Modeling, Secure Systems, and Intelligent Manufacturing. The presentation was moderated by Prof. Anil Sahasrabudhe, Chairman, AICTE.

The President is the Visitor of 161 Central Institutes of Higher Education. Out of 161 institutes, 53 attended the Conference physically while others are connected virtually. The President also hosted and honored some of donors, whose generous contribution has helped in building up a culture of “giving back” and promoting the objective of “Atma Nirbhar Bharat” in Central higher education institutions.

In his vote of thanks, Minister of State for Education Shri Subhas Sarkar expressed gratitude to the President to invite all the participants to the Visitor’s conference and give an opportunity to meet in person after two difficult years that the world had to go through owing to the pandemic. He also expressed gratitude to Union Education Minister Shri Dharmendra Pradhan for guiding through the process of organization of this conference. He also thanked Vice-Chancellors of all Central Universities and Directors of IITs/ NITs, Secretary (Higher Education), officials of the President’s Secretariat, Ministry, UGC and AICTE and other officials who participated in the conference.

He said that Prime Minister Shri Narendra Modi launched Azadi Ka Amrit Mahotsav to celebrate a progressive independent India, culturally rich heritage, and achievements of India, which is also an ode to the freedom fighters. He lauded the various presentations made during the conference on different issues and themes concerning higher education and outlining various initiatives taken in the space. The National Education Policy 2020 places huge importance on the industry-academia collaboration to drive innovation and research in our educational institutions, he further added. The Minister also thanked the donors and expressed confidence that all institutions will continue to work hard towards establishing institutions as benchmarks for others to follow.

iednewsdesk Jul 5, 2022
This year’s talk was given by Professor Simon Kemp, the University of Southampton’s lead in Education for…

University of Geneva: Palmitoylation, a new target for anti-cancer…

University of Geneva: Better assess the needs of people with multiple…

University of Geneva: Retina is not sparged by SARS-CoV-2

University of Geneva: Global health in times of environmental…