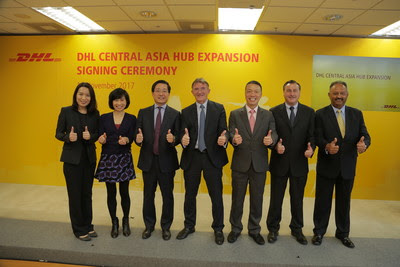 The expansion is timely as the CAH has recorded an average 12% year-on-year growth in its shipping volume in the past decade. As one of three global hubs for DHL, the expanded CAH will continue to act as the core hub of the DHL Express global and Asia Pacific regional network, handling more than 40% of its total Asia Pacific shipment volumes.

Ken Allen, CEO of DHL Express, said: “Given the expected rise in international e-commerce and intra-Asian trade, DHL is committed to strengthening our global network and services. Based in a strategically important location to DHL, the expanded Central Asia Hub in Hong Kong will not only bolster our operational capacity in Asia Pacific, but also facilitate the rapidly-growing international trade demands in the region and around the world.”

The expanded CAH will be equipped with an enhanced material handling system that will improve productivity and increase the hub’s throughput capacity — from the current 75,000 pieces of shipments per hour to 125,000 pieces per hour. When operating at its full capacity, the annual throughput of the expanded CAH is expected to go up by 50% to 1.06 million tonnes per annum. As a dedicated and purpose-built air express cargo facility at the Hong Kong International Airport, the expanded CAH will handle six times more in terms of shipment volume than when it was first established in 2004.

Ken Lee, CEO of DHL Express Asia Pacific, said: “Connecting with more than 70 DHL Express gateways in the region, the Central Asia Hub plays a significant role in strengthening our existing network of hubs in Asia Pacific, including Shanghai, Singapore and Bangkok. The expansion will also help us capitalize the growth in intra-Asian trade lane that currently contributes to 40% of our revenue in Asia Pacific. Equipped with fully automated X-ray inspection machines, it will increase the speed of our shipment inspection by three times — enabling us to expedite the processing speed of shipments that come through the CAH.”

The expanded CAH is expected to begin operations in Q1 2022, in time to capture strong demand in the Pan-Pearl River Delta (PPRD) region and completion of the Three Runway System for the Hong Kong International Airport in 2024. The expansion of the CAH will deliver about 50% increase in warehouse space to 47,000 square meters.

Already a TAPA Class A-certified facility, the expanded CAH will boast a state-of-the-art security system with a total of 520 CCTV cameras and an advanced access control system. The CAH also features a Quality Control Center (QCC) which monitors flight uplift/landing times in real time, reporting any irregularities on the spot, which in turn enables DHL to proactively notify customers in the event of flight delays or cancellations. The QCC is linked to the Asia Pacific Network Control Centre in Hong Kong and more than 70 gateways and over 500 service centers in over 40 cities in other Asian countries.

Strategically located in Hong Kong, within a four-hour flight time to major cities in Asia Pacific and in the PPRD region, the CAH is complemented by a well-established Asia Air Network which is served by over 800 commercial daily flights.

DHL is the leading global brand in the logistics industry. Our DHL family of divisions offer an unrivalled portfolio of logistics services ranging from national and international parcel delivery, e-commerce shipping and fulfillment solutions, international express, road, air and ocean transport to industrial supply chain management. With about 350,000 employees in more than 220 countries and territories worldwide, DHL connects people and businesses securely and reliably, enabling global trade flows. With specialized solutions for growth markets and industries including technology, life sciences and healthcare, energy, automotive and retail, a proven commitment to corporate responsibility and an unrivalled presence in developing markets, DHL is decisively positioned as “The logistics company for the world”.