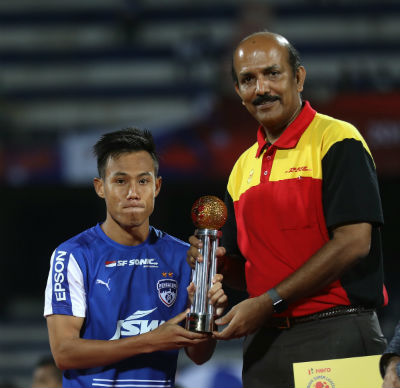 DHL secured visibility amongst football lovers this season by engaging with over 500 million people through a 360-degree interactive brand campaign, and particularly reaching over 180 million TV viewers.

In addition to Chennaiyin FC lifting the Hero Indian Super League trophy, the season finale also saw Mr. R.S. Subramanian, Country Manager of DHL Express India, handing over the esteemed ‘DHL Winning Pass of the Season’ award to Udanta Singh from Bengaluru FC for the highest number of assists in the entire season.

PM Narendra Modi address at the launch of Pandit Jasraj…

Commenting on the record outreach, R.S. Subramanian, Country Manager, DHL Express India said, “We are extremely delighted to see the brilliant outcome that this partnership has led to. It gives us immense pleasure to be associated with Hero Indian Super League as it not only fulfills our business objectives but also accomplishes our shared goal towards promoting football in India. We look forward to further strengthen our partnership in the years to come.”

Speaking about yet another successful season, an ISL spokesperson said, “We are delighted to see Indian football and the Hero Indian Super League consistently delivering value to its partners. Our association with DHL for last three years has been very fruitful in helping the brand connect with a growing young audience.”

As part of the partnership, DHL was the Official Match Ball Delivery partner for all games and awarded the ‘DHL Winning Pass’ to the player with the highest number of assists in each game.