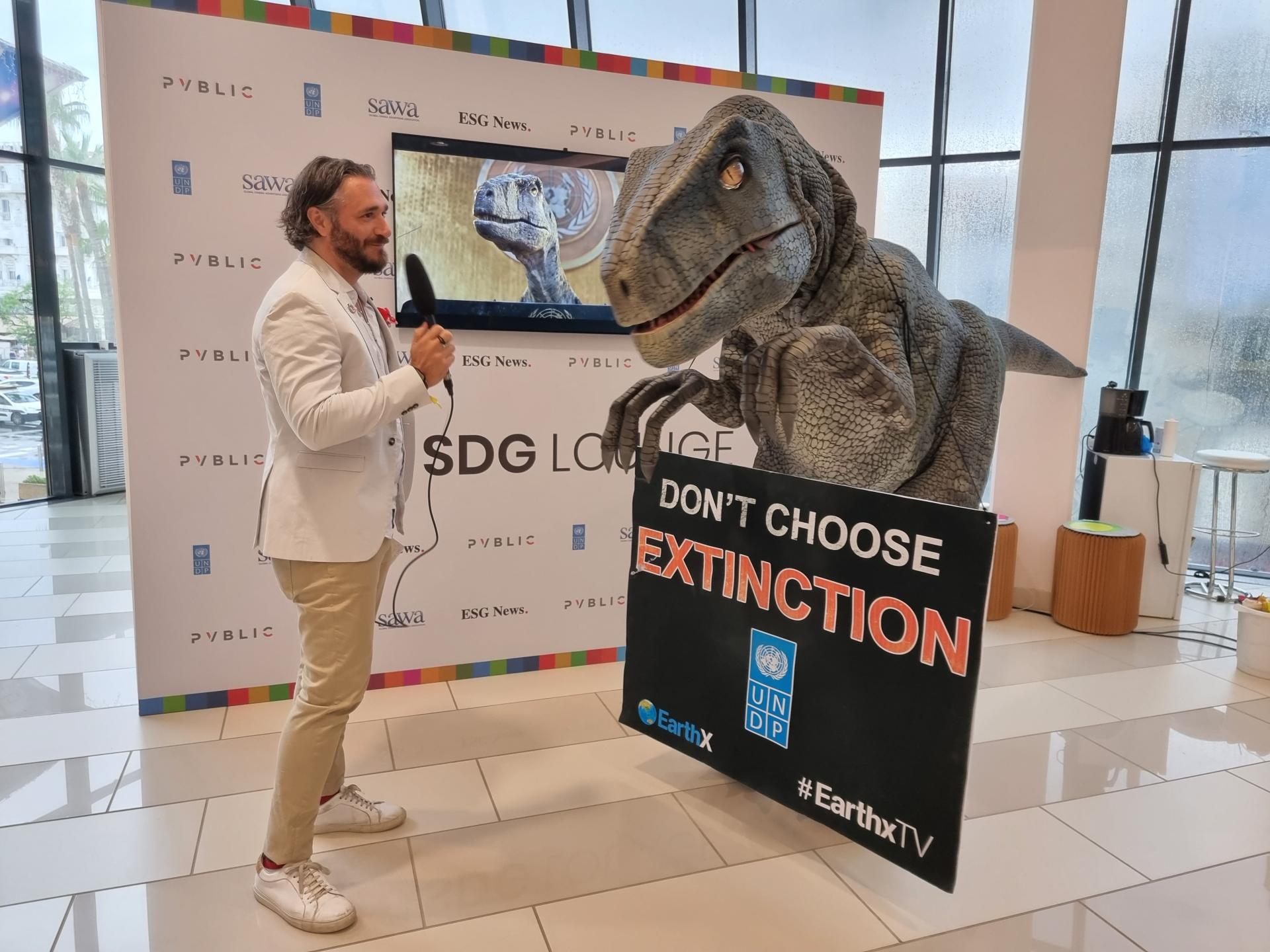 CANNES – A ferocious, life-like dinosaur roamed the streets and barged in on events at Cannes Lions International Festival of Creativity, cheered on by hundreds of members of the creative community. Brought to Cannes by the United Nations Development Programme (UNDP), PVBLIC Foundation, and EarthTX, Frankie the Dino stars in the UN agency’s film on climate action called “Don’t Choose Extinction.”

This first-ever film made inside the UN General Assembly using computer-generated imagery (CGI) reached a global audience of 1.8 billion. Thanks to UNDP’s partnership with SAWA Cinema Advertising Association and the Global Cinema Medium, the short film is currently screening as an ad for eight weeks in movie theaters across 30 countries in 16 languages.

Off-screen, Frankie the Dino became the week’s main attraction. As the utahraptor strolled the Palais de Festivals and took an occasional beach walk, crowds of creatives lined up for selfies.

Frankie was brought to life by EarthX, the official non-profit media partner of UNDP’s Don’t Choose Extinction campaign together with the Social Revolt Agency. EarthX convenes one of the world’s largest environmental gatherings with its annual Earth Day Expo and conferences in Dallas, Texas. Later this summer, EarthX will launch EarthXTV, an environmental television network, on cable in the United States and UK.

“Bringing Frankie to life at Cannes Lions is a perfect example of how multiple platforms can be used to amplify the world’s most impactful – and creative – environmental campaigns. The creative community should step up to the challenge and use its impressive abilities and minds to get this message out: we only have one earth and the time to act is now,” said Boaz Paldi, Chief Creative Officer at UNDP.

UNDP showcased the campaign in front of more than a thousand delegates on the festival’s Debussy stage, together with the President of SAWA, Florian Weischer and actors Nikolaj Coster-Waldau and Aïssa Maïga, the Danish and French voices of “Frankie the Dino.

In the campaign ad, Frankie, a computer-generated dinosaur is seen storming into the United Nations General Assembly, seizing its iconic podium, and urging stunned-looking dignitaries to avoid the dinosaurs’ fate—extinction—by making changes to tackle the climate crisis. “At least we had an asteroid,” the dinosaur warns, referring to the popular theory explaining dinosaurs’ extinction 70 million years ago. “What’s your excuse?”

While at Cannes Lions, Frankie the Dino made a special appearance at the SDG Lounge, a media space co-created by PVBLIC Foundation, UNDP and ESG News, that featured interviews and panel discussions highlighting how the creative sector is taking action to advance the 17 Sustainable Development Goals (SDGs). The SDG Lounge emerges from the success of the SDG Media Zone and SDG Media Summit, high-level events which have traditionally been held at the United Nations headquarters and at major convenings around the world.

“We need everyone taking action to achieve the SDGs, and we are excited to launch the SDG lounge with the UNDP at Cannes Lions to engage the global creative industry. Partnerships are a driving force to create positive change. We are grateful for the support from ESG News, EarthX and SAWA for this important launch milestone,” said Sergio Fernández de Córdova, Executive Chairman of PVBLIC Foundation.

UNDP research released as part of the campaign shows that the world spends an astounding US$ 423 billion annually to subsidize fossil fuels for consumers – electricity that is generated by the burning of oil, gas, and coal. By 2021 the value of fossil-fuel subsidies increased by more than US$ 120 billion globally to an estimated US$ 578 billion. The war in Ukraine has caused rising oil prices in many countries and there are fears that governments may increase subsidies even more to help reduce the impact on local populations.