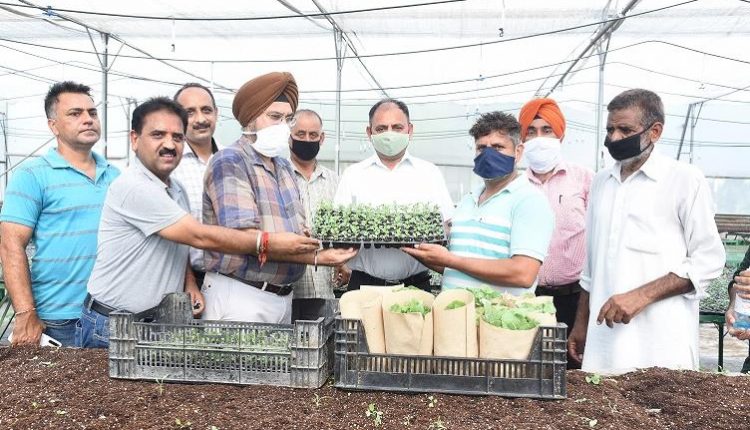 The seedlings of different vegetable crops and varieties are being raised and to be distributed among the vegetable growers of Jammu on a no profit and no loss basis.

The Director Agriculture stressed on promotion of urban rooftop cultivation on large scale using grow bags, crates, trays and pots as urban dwellers are adopting kitchen gardening with keen interest. He also advocated the promotion of local varieties of vegetables as these are pretty popular among the consumers.

The Director Agriculture handed over the vegetable seedlings to farmers of Marh and Misriwala namely Rattan Chand and Darshan Lal on the occasion.

Interacting with the farmers, the Director Agriculture informed that about 2 lakh seedlings of Cauliflower, Cabbage, Knol-Khol, Broccoli, Lettuce, Red Cabbage and Hag Saag have been raised for distribution among the farmers. Further it was appraised that 600 grow bags of vegetables, medicinal & aromatic plants have been distributed by Vegetable Improvement scheme (VIS) on subsidized rates.

Later, the Director also inspected the vegetable demo unit where Sweet Corn, Yard Long Beans, Bitter Gourd and Brinjal have been raised on a trial basis.