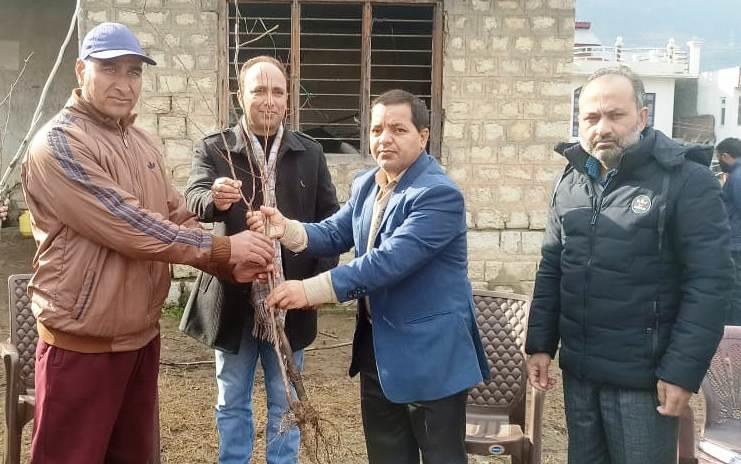 Doda: Director Horticulture Jammu, Ram Savak, reviewed the implementation of Centrally Sponsored Schemes in Doda during a tour of the district.

The Director inaugurated the Royal Honey Unit, a low cost preservation unit at Sehnaii of block Bhaderwah and also issued certificates to trainees, who have successfully completed one month training programme in Fruits and Vegetables Preservation at village Rounda of Diggi Panchayat.

The Director also distributed the fruit plants to the beneficiaries and kick started the plantation in the district.

While interacting with farmers at Khaloo of Bhaderwah block, the Director explained the developmental schemes being implemented by the Department of Horticulture and the incentives being provided to the beneficiaries under different schemes. He assured that the Department of Horticulture will try its level best to meet the demands of the farmers of the District. The farmers were advised to switch over to new high density Plantation programme in near future so as to exploit the full potential from the fruit industry.

Director Horticulture issued strict instruction to officers/ field staff to remain punctual, dedicated and honest in performing Govt. Duties and maintain a close liaison with the orchardists so that they get the benefits of the scheme under implementation in the District and leave no stone unturned to achieve the targets in full in the financial year.