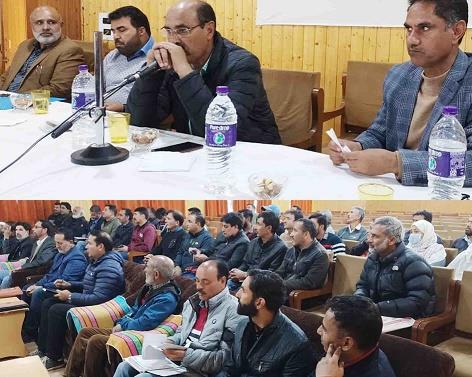 SRINAGAR : The Department of Agriculture is enduring to bring uncovered areas to mainstream agriculture and to translate the ideas into actions and in this regard a multifaceted approach has been adopted by the Department, said Director Agriculture Kashmir, Chowdhary Mohammad Iqbal in a review meeting convened at Dak Bungalow, here.

The Director said that the officers and officials have to be more determined and innovative when it comes to the implementation of different schemes on ground.

Iqbal, highlighting the commercial importance of oilseeds (mustard) , asked the officers to explore the opportunities for maximizing its cultivation in their concerned areas. He said that under the National Mission on Edible Oils different benchmarks have already been set and to achieve them it is necessary to explore domestic resources to maximize the production.

He stressed upon the officers of the district to sensitize the farmers regarding the benefits of soil testing and ensure the entire cultivable area is brought under the soil testing.

While addressing the gathering, the Director said that the Department is focusing on bringing new crops to the agriculture scenario of the valley. He said the encouraging trend is that farmers from different sections of the society and economic class are accepting this with open arms.

Chief Agriculture officer Kupwara Nazir Ahmad Wani apprized the chair of progress on the implementation of various centrally sponsored schemes and flagship programs in the district.

Deputy Director Planning, Mohammad Younis Chowdhary and other senior officers of the district were also present in the meeting.