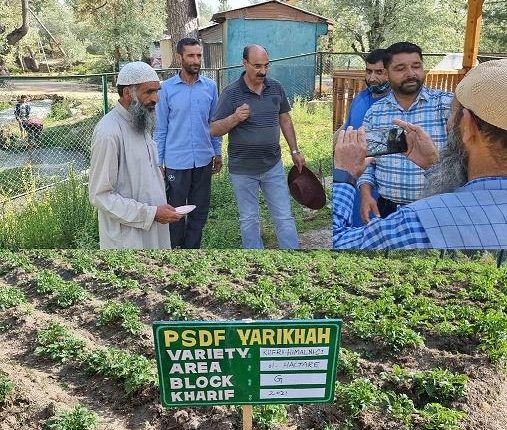 During the visit, the Director inspected different plots of the Farm and interacted with the concerned officers and technical experts of the Farm.

The Director on the occasion highlighted the importance of using the latest interventions and technologies during the production of Potato Seed Crop.

He asked the concerned to put in all the efforts for a successful cropping season so that the division becomes self reliant in terms of Potato Seed requirement and also reaches the position to export seed (Potato Seed) to the other parts of country as in valley is having one of the best climatic conditions for seed production in the country.

Earlier Manager, Potato SMF gave a detailed description of different activities that are being carried out in the farm. He also informed the visiting Director about this year’s crop and expected yield.

The Director during the visit was accompanied by Joint Director Agriculture Extension Mohammad Qasim Gani and other senior officers of the department.

Red Cross distributes Oxygen Concentrators for use by Covid patients

‘Innovation, Information and reducing Inequity of care’, only way to be one step ahead of virus, advice International experts at CII Young Indians Round Table on COVID 19 in India