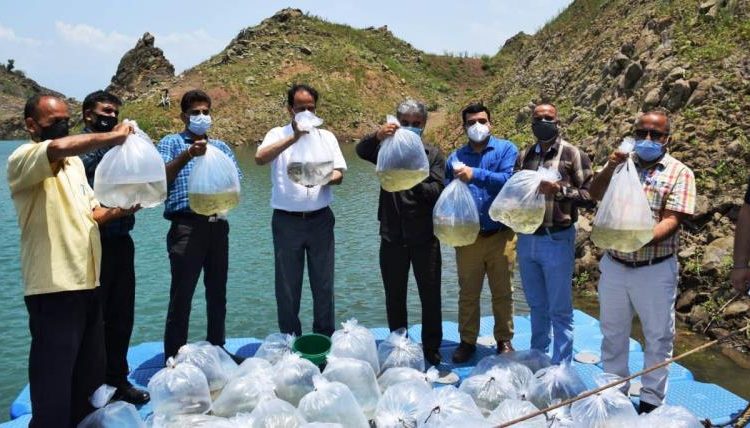 Speaking on the occasion, the Director said the Department of Fisheries is the sole agency responsible for development of fisheries within the UT of J&K. There are a good number of infrastructure in the shape of seed producing farms, fish rearing units, fish production facilities in the shape of hatcheries and farms both in the private and government sector established by the Fisheries department, he added.

He said, “it is with the efforts of the department that fish production of the UT has touched 20.09 thousand tonnes ( approx) which is being harvested by the most downtrodden community of the society- the mahigeer community which constitute about 75% to 80% of the total fish production. The rest of the production comes from government as well as private farms and from the world famous trout angling.”

“The department of fisheries takes care of the sustenance of naturally occurring biomass of various fish species which are commercially important both in natural water bodies as well as in captive rearing,” he added.

While elaborating the fishing scenario of the UT of J&K, the Director said scores of Mahigeer families are associated with captures of fish from natural water resources including rivers, reservoirs and other bigger and small water bodies. “As such it is the responsibility of the department to take care of these water bodies for their sustenance in respect of fish biomass which serves as direct means of livelihood for more than 1,20000 souls” he maintained.

The Director said, the best way of consumption of natural water resources is by way of stocking with quality, disease resistant varieties of fish Seed. The department is adopting conservation measures by way of augmentation with fish Seed as a measure method in addition to watch and ward for curving illegal fishing, he added.

Advisor Bhatnagar reviews progress on implementation of NEP-2020 in HED