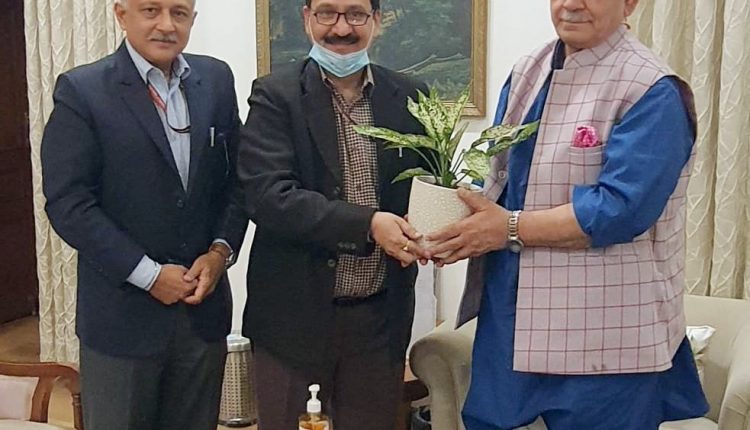 New Delhi: Director General of Indian Institute of Mass Communication Prof. Sanjay Dwivedi on Friday paid a courtesy call on the Lieutenant Governor of Jammu and Kashmir, Shri Manoj Sinha. During this, Additional Director General of the Institute, Shri Ashish Goyal was also with him. Prof. Dwivedi apprised the Lieutenant Governor about the activities of IIMC’s Jammu campus and informed him about the progress of the newly constructed building of the institute.

After the meeting, Prof. Dwivedi said that apart from New Delhi, IIMC has five other campuses across the country, one of which is in Jammu. The foundation stone of the new building in Jammu campus was laid by the Prime Minister, Shri Narendra Modi on February 3, 2019. This campus is now ready. According to the Director General of IIMC, this new campus will be inaugurated by the Prime Minister in the year 2022. He said that we have requested the Lieutenant Governor to conduct a formal inspection of this campus before the inauguration of the building.

Speaking on the occasion, Shri Manoj Sinha said that IIMC holds a leading place in the fields of mass communication education, research, and training. The work done by IIMC to educate future journalists aware of the high values of Indian journalism is noteworthy, in addition to modern technology-based journalism training.

During the meeting, a copy of the special issue focused on ‘100 years of Media Education in India’ of the Institute’s research journal ‘Sanchar Madhyam’ was also presented to the Lieutenant Governor by the Director General of IIMC.

DG IIMC two day visit to Indore; Will be attend the program of Devi Ahilya Vishwavidyalaya

On Human Rights Day, young girls talk about their right to education through #DigitalChaupal