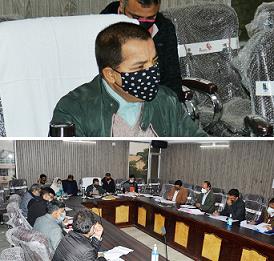 The Director impressed upon the officers to put in their full efforts and leave no stone unturned to achieve the targets in full under all schemes during the financial year 2020-21.

He stressed upon the officers to make extra efforts for the success of High Density plantation in the temperate areas of Jammu division. He also reviewed progress regarding ongoing civil works under their jurisdiction.

Certain issues were raised by the officers, responding to which the Director assured that all the genuine problems would be redressed.