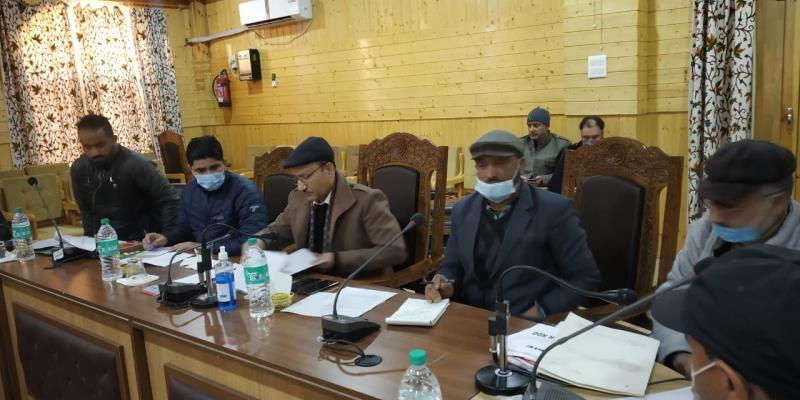 During the review it was observed that against total Labour Budget of 7.00 lac person days under MGNREGA, 5.23 lacs has been achieved and an amount of Rs. 1929.17 lacs stands disbursed under MGNREGA during the current financial year.

The indicators under other schemes were also reviewed and the officers were enjoined upon to achieve the targets in a time bound manner.

The Director stressed for completion of works under various schemes within stipulated time and laid stress upon creation of quality assets having wide scope of community benefits. The designated web portals for different schemes are updated simultaneously so that the relevant information is disseminated to the general public to ensure transparency.

Further the Director stressed upon the officers to be pro-active in disposal of pending complaints on Grievance Portal of LG J&K UT, Grievances/ Complaints forwarded by Administrative Department, Anti-corruption Bureau. Besides, the pending court cases are pursued vigorously, so as to ensure their time bound disposal.

The Director also impressed upon all to adhere to the set time line for payment of wages, geo tagging, preparation of bills, completion of PMAY (G) houses, expedite the progress under 14th FC.

The Director was accompanied by Superintending Engineer, REW Kashmir and Deputy Director (P&S) DRDK and the meeting was attended by Executive Engineer REW Bandipora, Block Development Officers and other officers/ officials of the district.