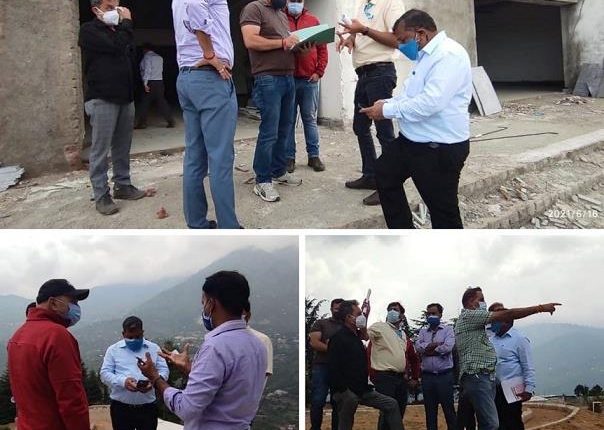 Jammu: Director Tourism Jammu, Vivekanand Rai today conducted an extensive tour of Patnitop, Sudhmahadev and Mantalai Area. He was accompanied by a team of officers wherein various Tourism projects undertaken by the Department were inspected.

During the tour he paid obeisance at the holy shrines of Sudhmahadev and Mantalai and also interacted with local pujaris and tourists and listened to their suggestions for developing these areas.

Sudhmahadev located 112 Km from Jammu, houses a highly revered Shiva Temple which is believed to be nearly 3000 years old, having a black marble idol of Lord Shiva and Goddess Parvati, besides a Trishul. A few kilometers ahead of Sudhmahadev is Mantalai, surrounded by lush green Deodar forest. As per legend, it is the place where Lord Shiva got married to Goddess Parvati.

“As Mantalai and Sudhmahadev are the treasure of rich ancient temples, they have immense potential for Pilgrimage Tourism” said the Director Tourism, Jammu.

During his visit, CEO, Patnitop Dev. Authority Sher Singh, briefed the Director about various initiatives taken by PDA for making Sudhmahadev Mantalai Circuit more attractive. He also inspected the ongoing works at International Yoga Centre Mantalai being carried out by the Department. Further, he directed the executed agency to complete the project within a fixed time frame.

While extensively touring the area, he also visited Patnitop and Sanasar Hill Station. He inspected the circular road and other ongoing developmental projects like huts at Sanasar, cafeteria at Nathatop etc. He visited Sanasar and Nathatop and directed the concerned officials to carry out cleanliness drives in the area further he directed them to provide land status to the department at an earliest so that in near future any infrastructure development be carried out. He also asked them to explore the possibility of Adventure Tourism in the area like Paragliding, trekking.